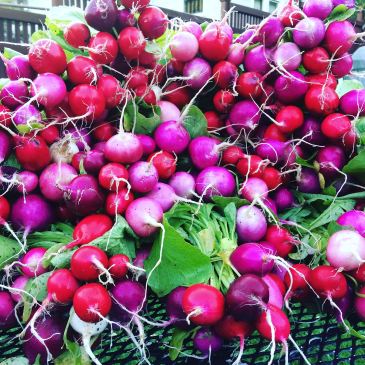 ***FYI, this description is a bit dated. I’m now 45, and the farm has matured along with me. We now focus exclusively on microgreens. These are being supplied to the Whole Foods Co-op, Mount Royal Fine Foods, The Boat Club Restaurant, and Lake Avenue Restaurant. I’ll be updating this page in the near future, but for now, I enjoy this connection to our roots. It goes to show that with tenacity, grit, and the ability to adapt, we can all pursue our dreams.***

At 40 years old, I finally began pursuing something I had dreamed of doing since I was a little kid: farming.

I essentially have a Green Acres situation, however. In reverse. My wife is the only one keeping us from moving from the city to the country. Ironically enough, her stubborn refusal to move out to some real acreage is the main reason this farming dream is becoming reality. (It cracks me up to use a word like “dream” here. This lifestyle definitely does not include rainbow-farting unicorns. The work load and learning curve are just NUTS! Most people with a master’s degree crammed in their back pocket do not crave to be “a man of the soil.”)

Rather than incurring a quarter million dollars in debt, OR MORE, I am farming on borrowed/leased land in the city instead. Thus, the problem of my wife’s intractability, became the solution. It’s very likely that my farming dream would have remained a dream forever if it weren’t for her.

Critics might say, “This bastard is clearly having a midlife crisis!”

Yes, I am! Since being laid off from a corporate job three years ago—which had slowly sucked away at my soul for a solid decade—I’ve been groping along. I wrote a book that was well received, but that thing sure isn’t going to feed my family. At least not in the near future. I will continue to write for the newspaper and put out occasional books, but I am really excited about producing a high-quality consumable product that will keep customers returning week after week. Carving out a niche in the community is the goal. After publishing The Emancipation of a Buried Man I was blessed with amazing feedback, but it was frustrating to not have additional products to keep such supportive fans coming back for more.

I am striving to build a life for my family that is rooted in the rich soils of the land and  community. You will find us at the intersection of economy, community, and ecology. When you take meaningful economic exchange between neighbors out of the equation, I believe you lose all three. This is why the local food movement matters. A relationship between food producers and eaters helps to foster a healthy ecosystem. Of course, it also tastes great AND is better for you.

Having a small amount of space in a cold climate, my focus is on baby greens, a few baby root crops like radishes and beets, and microgreens.  I’ve fallen in love with row cover. As an organic gardener, I have found this tool to be indispensable… 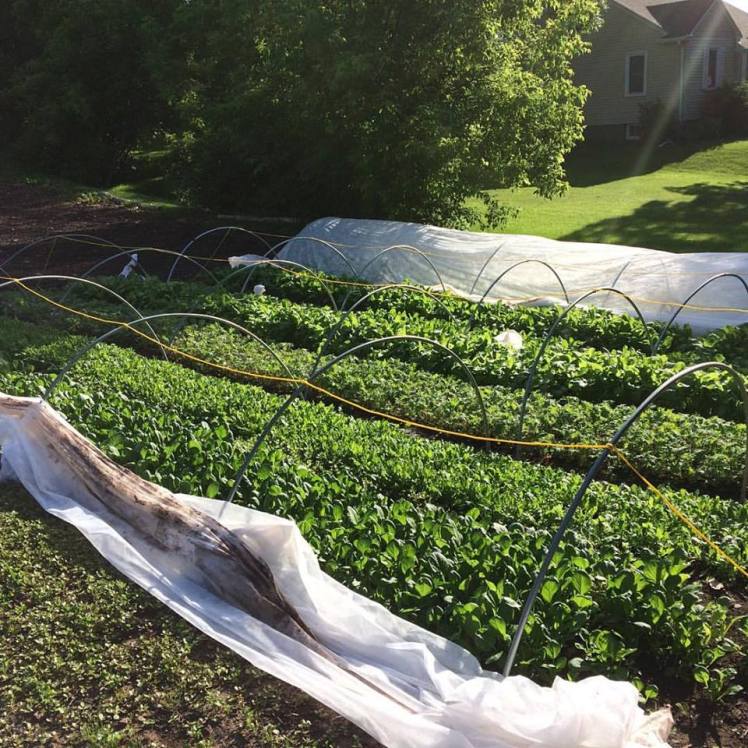 Due to a crisis over land, now resolved, microgreens have unexpectedly become a huge focus of the farm. The experience has taught me the value of arriving at a solution, rather than imposing one. Primary crops are pea, radish, and sunflower shoots, but I also grow specialty items, such as bulls blood beet microgreens, for catering events. Currently, you can find my microgreens at Lake Avenue Cafe, Mount Royal Fine Foods, at both locations of the Whole Foods Co-op,  and directly from my booth at the Duluth Farmer’s Market from May – October. These are nutrient-dense and incredibly tasty.

These keep for up to two weeks or more…. 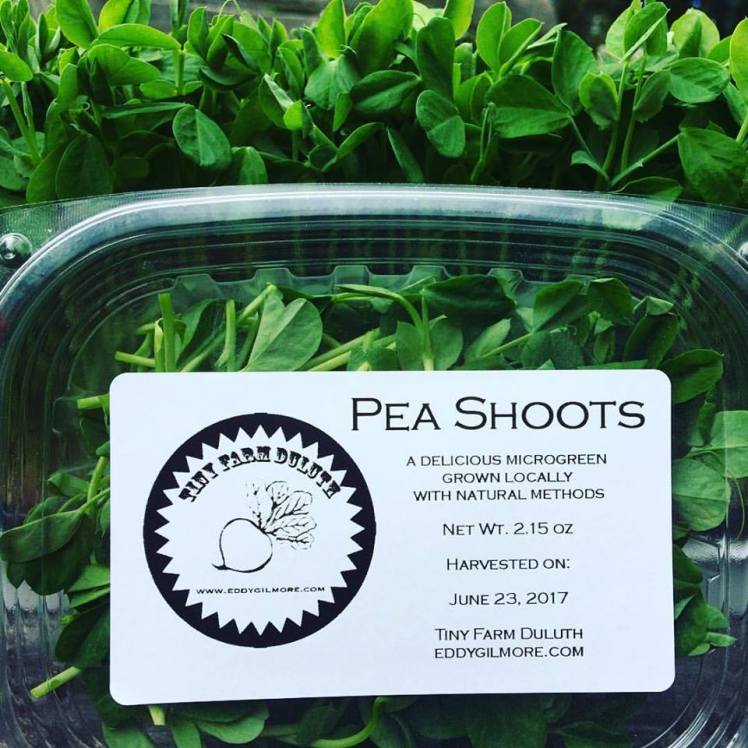 There was sod to remove: 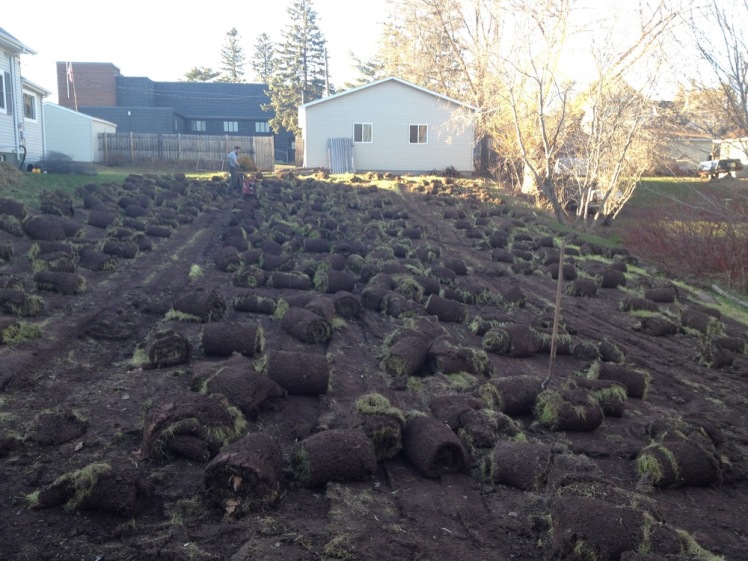 Rocks in astounding numbers, and QUALITY:

Endless preparation of the land:

It wasn’t terribly realistic to commit to farming in April, find and prepare land, and make actual money in the same season. I moved around largely by bike, and delivered fresh, nutrient-dense produce directly to a handful of families. I grossed something like a thousand bucks. With expenses, I’ll have to admit it wasn’t profitable.

2017 should be different. I have received a USDA loan, which will afford a significant upgrade in infrastructure and equipment: a walk-in cooler, adequate irrigation, packing equipment, deer fencing, etc. Perhaps more importantly, I am selling at the Duluth Farmer’s Market (the big red building at 14th Ave East and 3rd Street) each Saturday and Wednesday this season. I also have a growing number of restaurants purchasing my produce. (Mid-season update: the business side of things is going even better than I hoped! I’ve done extremely well at the farmers market in particular. Thanks for all your support.)

Quick growing crops, like lettuce, which can handle cool conditions, are staples…

Arugula, kale, beets, carrots, radishes, and spinach, all grow well here. They also have a quick turnover, which is important when you’re farming on just 6,000 square feet of land.

I also raise pastured chickens, about a hundred at a time, on land just outside the city. They are moved to fresh grass daily, are fed non-GMO feed, and are untainted by vaccines, antibiotics, etc. The quality is unmatched, but holy mackerel they are a lot of work! My current batch will be ready for pick up on July 27th. Email me at eddygilmorehasleftthebuilding@gmail.com or text me at 218-349-1098 so I can get an order form to you. These are expensive to raise, and the price of $4.75/lb reflects that. Due to a need to run the farm as a business, and focus on a few high value crops, I’m not sure if I’ll raise these birds again next year, so get ’em while they’re hot!  Pigs, sheep, and bees are possibilities at some point. Time will tell.

We have two chicken tractors in motion for this current batch. Recently I snapped this shot mere moments before a thunderstorm really started getting wild. We’re out there in all weather!

Since I really don’t have time to update this website much during the growing season, find me on Instagram @tinyfarmduluth. I provide updates on a nearly daily basis there, because it’s quick and fun. These also feed over to my Facebook page: Tiny Farm Duluth. Thanks for your interest!