I’m gradually migrating some of my past columns from the paper over here. This one was from last summer, and is about one of my family’s favorite destinations on the planet.

Here I am able to share with you just a portion of one day, the third, of my family’s recent vacation within the backcountry of the Porcupine Mountains Wilderness State Park in the UP of Michigan. From our remote rustic cabin, we hiked 1 mile to the mouth of the Big Carp River, and crossed into the Eastern Time Zone in doing so (as if time really matters there). We enjoyed a picnic, and my wife and kids spent an hour and a half playing in the river and Lake Superior while I enjoyed an outstanding trail run inland from the lake up the Big Carp River Trail.

I went nice and slow at a grandfather’s pace while continually being enthralled by the size of the hemlock trees especially, many of which are several hundred years old and have the girth and height to prove it. I was also enchanted by Shining Cloud Falls.

At a 20 foot drop, it is not impressive compared to our waterfalls in northeastern Minnesota, but it possesses a magic all its own.

The waters divide around a large rock, and descend from ledge rock in such a way that it casts the appearance of cascading diamonds. The large rock in the middle was festooned with ancient moss that looked like a green broach at its base, so the waterfall ringed it in the splendor of a diamond necklace as the diamonds were cast into a clear deep pool of shimmering water.

Virgin timber, in the form of ancient Eastern Hemlock stood as sentinels as the water cut through the steep gorge. It was magical.

Throughout the run I was transfixed by the ever changing forest. There was plenty of the massive hemlock that I love so much about the Porkies, but occasionally I’d be among old growth maple, basswood, and birch. Then it would change to relatively younger specimens with a diameter of a foot or less. Even among the smaller trees the forest felt clear, wide open, and uncluttered by the scrappy brush that litters our forests so much. I have also observed no buckthorn in the park yet. In places my gaze peered through the forest to a depth of a quarter to even a half mile, much like the bullet from a rifle might pass between the trees unobstructed.

Eventually I turned a corner and stopped to grab my bearings in a lower area containing a fair amount of mud. Many large dead hemlocks lay on the ground as they have since perhaps WWII, completely covered in moss, and some being little more than a large hump in the ground continuing to give life these many years after having fallen.

I was struck by the eerie silence in this graveyard.

The river had veered quite a distance from the river at this point. There was absolutely no wind, and not a creature stirred. For several moments there was absolute silence, and then (as if it didn’t get the memo) a squirrel or chipmunk took to chewing on something to try and break the awkwardness.

Still, this felt like the part in the movie where a cougar was stalking its prey, unbeknownst to the interloper on its territory. I carefully tiptoed through this burial ground of the trees out of respect, and was a bit wary of the large burl on one of the trees that was three times as big around as me. It was like an all-seeing eye spying on me that kept its eye shut so as to avoid detection. Still, however, I was lured deeper into the forest, much like the fly that lusts after the pleasures within the Venus Fly Trap or the aptly named Corpse Flower.

I was compelled to keep going and experience the multifaceted splendors of the forest and its many attitudes. Eventually I would come back to the river where the wind stirred, the birds sang, and the many waters babbled. The silence deep inside the untouched forest is what seduced me though. Our cabin was within earshot of the river and loud waves of Lake Superior (much larger than the waves back home in Duluth since this is in a wide open part of the Lake), so the silence was quite striking and welcome.

When I nearly reached the spot where I was to meet my family, I slowed to a walk to climb a steep hill. So entranced had I become by the forest (envisioned as a forest museum by early advocates that helped establish the park) that I hadn’t felt my usual aches and pains from recent injuries until that moment. It was awesome. More than a memory, the experience imprinted into my muscles, bones, and soul. 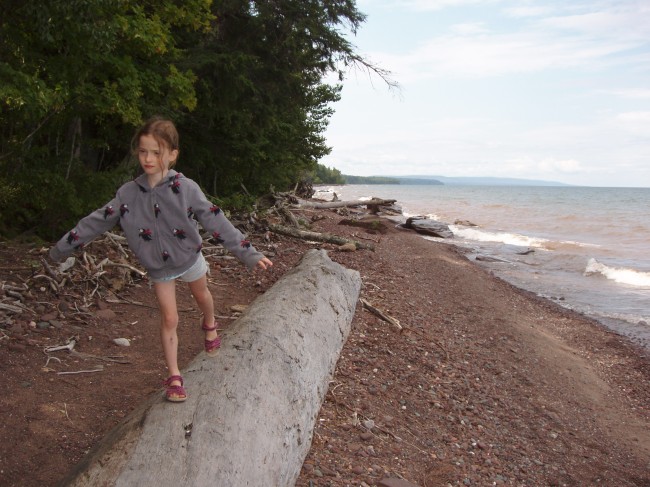 One thought on “A Run in the Woods”