Life happens, even when we’re not looking. I’m learning to roll with it and enjoy the ride. Here are two rather epic examples that came with the worst timing imaginable. They impacted two of the most important events of my young career as a writer/author/weirdo.

Two hours before my book launching party at a local coffee shop we heard a loud clanking sound in the basement, which set our wheels into motion and upended our lives. While my daughter was outside greeting friends over a mere 10 minutes, excited to bring them down for a little play time with our baby chicks, our stinker of a dog found a way to climb five feet up and into their brooder. The clanking was the sound of our terrier’s noggin banging into the hanging heat lamp. My wife reached the horrific scene first, and it just about destroyed her. Half our baby chickens were eviscerated. Not pretty!

Then my kids walked into the door after school. Everyone was crying and upset. I did what any father would have done. I loaded everyone into the car so we could quickly buy replacements, and hopefully put a band-aid over their hearts. While at the local feed store we also picked up a pair of ducks. This will surely be the sort of impulsive mistake that’ll keep on giving, but the darn things are ridiculously cute. They transformed the situation from despair to excitement.

What a distraction, however! Needing to temporarily separate them from the chickens, I had to run around like the proverbial headless poulter while duplicating our already considerable efforts. Chicks were moved outside to the henhouse, and in a whirlwind I obtained all the necessary waterers, feeders, heat lamps, etc. By the time these tasks were completed I only had a half-hour to shower, eat, and ready myself for the party! I hadn’t planned anything, and didn’t even know what readings to choose from. 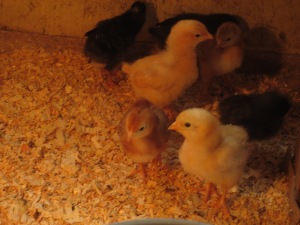 The book-launching party, while not perfect, was a smashing success anyway! I really only had to show up. A fantastic local band carried much of the water as they entertained the crowd, which must have numbered somewhere around a hundred in total. The coffee shop owners took care of everything else. This wound up being an ideal arrangement for me, and there was no time to stress over details. The coffee house was packed to capacity, the bike rack outside was full, and people spilled out onto the sidewalk on a lovely spring day. I felt a tremendous amount of support, and for the first time it gave me cause to simply enjoy the festivities and celebrate. Twas informal and messy, like me.

Yesterday’s early morning television interview was similar, and yet very different. Under the impression that they wanted my bike and snazzy trailer in the studio, I biked the seven miles to the station because I simply was not going to admit to driving these items to the interview. That would be so embarrassing! Well, it turned out they didn’t need them for the short 3-minute T.V. spot anyway, so the entire effort was an exercise in futility!

First of all, the studio is located at the top of Observation Road at one of the highest points in Duluth, requiring an elevation climb of roughly 600 feet. Add in the fact that there were 40 mph gusts flying in from Lake Superior that nearly blew me over, I was pelted by rain, and it was 36 degrees, I was bloody exhausted! Also, nervous bowels at 5:00 and 5:15 am coupled with a bridge that was inaccessible (requiring a lengthy detour) caused me to be 10 minutes late! In the television world 10 minutes of waiting is an eternity. I very nearly lost my turn in the spotlight due to it. When I arrived, all smelly and wet, they said I only had 2 minutes to clean up in the bathroom!!!

Well, you can see the results in the link to the interview below. I look like one heck of a hot mess! On the bright side, I had absolutely zero opportunity to sit there and worry. On the negative side of things, I was completely unprepared. The big question that stumped me was about bedwetting, and from this experience I learned that I need to develop the art of pivoting by quickly answering the question and redirecting to what I’d rather talk about. This was a good lesson to learn. You see, I’ve never really talked openly about my 19 years of bedwetting. I provide two humorous examples in the book, but writing about a source of embarrassment and shame is different than discussing it on live television!

Additionally, I was completely unable to style my normally awesome hairdo. My thinning hair is normally something I conceal with the ardency of a CIA operative. For some reason, I find these embarrassing moments to be utterly liberating. This is one of the last things that I’ve spent my life hiding, and here I am naked and bare before the world. Such moments bring freedom, actually. That said—FRIENDS, FAMILY, AND OTHERWISE—I’m completely unwilling to discuss this topic and I don’t want any comments about it either! Just content yourself in knowing that I know that you know that I know that you know. We’ll leave it at that for another 10 years, at least. I’ve feared the bald thing my entire life. My grandfather, if you can believe it, was completely bald by the age of 18. He looks 100% like the grandfather of my memories in his senior picture! Lets just say that it has been a source of anxiety for decades. Throughout the ride and interview I found myself envying people like my neighbor, who have fully come to terms with this malady. He bikes to work year-round, and could have ridden to this interview in the rain just fine. Ten seconds and a towel would have him looking clean as a whistle. Perhaps this will be the silver lining at the end of my long road of coming to terms with reality.

Here’s one last note on the experience that absolutely cracks me up, and I’m getting old enough to be able to comment on such things without looking like a complete jerk. The hosts on the show are rather young and attractive. Apparently the gal who does the weather mispronounced the word precipitation (kind of a mishmash of perspiration/precipitation) shortly before I came on. My young daughter commented on it, and my wife says, “Probably because she saw you.” HA HA. YES, my Greek God-like figure was certainly the cause of the distraction as you’ll quickly see by clicking this link! Can you tell I’m not wearing makeup?

3 thoughts on “Dog, Ducks, Chicks, EVISCERATION, and Making a MESS of Myself on Television!”