My quest to network and develop friendships within our local community of artists continues. Pretty pictures, beautiful music, and lovely letters are not the primary criteria. I seek to catch a glimpse into the soul of people who endeavor to live all of life artfully, creatively expressing themselves in all that they do. All of life is art. For Adam Swanson, painting happens to be his most effective method for communicating himself and for expressing complex ideas.

There are layers to his work. You can view them as simplistically or as complex as you’d like. He has captured the imagination of serious art aficionados, children, activists, and normal workaday folks who don’t have a lot of patience for art that is simply about art. Lacking the expertise or mental faculty to analyze such work, I prefer to study it as a child would: with a sense of wonder at the imagination of these visual artists who are able to convey deep thoughts and feelings without using a single word. As a writer whose last piece consumed 74,000 individual words, I find this remarkable.

Adam’s unique voice is worthy of a careful listen, which once again is most effectively expressed visually rather than audibly. “He who has ears to hear, let him hear.” His take on life—man’s relationship with the world and its creatures—has been shaped through an eclectic set of experiences, of which I only scratched the surface during our visit. He has spent significant time abroad, has a deep appreciation for other cultures, and has spent two years on the one continent without a country. Yes, he spent time in Antarctica doing grunt work, fixing boats for use in scientific research, and obviously derived great pleasure in becoming acquainted with penguins. Adam sat with and held them, quietly observed, and studied the creatures that became a consistent theme in his artwork.

Swanson is ridiculously prolific, is displayed in umpteen galleries, and always seems to be working on some large public installation. Though the man has attained what I’d describe as a degree of prominence, he certainly ain’t rich. Like my friend Charlie, he has no retirement plan yet.

Adam feeds his family while honing his craft with remarkable focus, refusing to become stagnant. Honestly, his story is nothing short of inspirational.

Consumers of art have little concept of the sheer volume of paintings, music albums, or massive quantity of books that one must sell in order to sustainably provide for one’s family. It really is astounding that anybody is able to successfully make a go at this kind of work. There are no safety nets, and you really need to push yourself.

Adam pushes himself, and admirably at that. When he set his mind to becoming a full-time artist, he committed to painting 10-12 hours a day, and then shopped his body of work around at local galleries. He was, and is, focused. Committed. This means of making a living wasn’t handed to him on a silver platter. 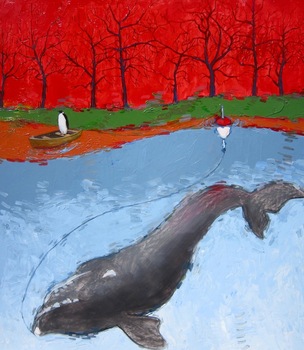 After finding a way to do this sustainably in just a couple years, he decided to temporarily relocate his young family to Duluth’s sister city, Växjö, Sweden, for four months. Utterly fascinated, I peppered him with questions for at least an hour on this topic. Having lost my job, I am reticent to spend money on anything that isn’t absolutely “essential.”

Adam, on the other hand, scraped out nearly the entire contents of his family’s small savings to accomplish this. It was a kind of self-designed artist-in-residence or fellowship sort of experience. He knew what he wanted, and made it happen, to hell with the consequences. It has clearly made him into a stronger artist. One with a deeper well to draw from. He describes the preparation for this, and he is far more of a detail-oriented planner than I expected, as an exercise in financial planning. Adam obtained a grant that covered his family’s airfare to Sweden, but most other expenses he had to find a way to cover himself. Working through contacts, he received a donated studio space within a converted former insane-asylum that is now filled with various artists. Some might say, “What changed?!!!”

For somewhere between $1000 and $1200 per month he rented a nice cabin on a lake. The family that owned the rental lived nearby, became close friends, and there was a wood-fired hot tub (I picture human stew in a large, cast-iron pot) and sauna on the property. They lived a 30-minute bike ride from the city, and a stellar public transportation system was at their disposal. The sister-city leaders generously donated a bus pass and bikes for the family’s use. Life slowed to a simple pace, and they fell into a rhythm.

Adam freely shares many of the financial details, seemingly doling this information out while conveying that it is indeed possible to live outside-the-box. Adam rented out his Duluth home temporarily, which only covered three-quarters of the mortgage. He sold a couple paintings over there, gave a bunch away, and was able to tote home 15 pieces within his 4-year-old’s luggage (and thus paid nothing extra to bring them home).

I’m just blown away with how he made this happen. Think about the risk involved here. More importantly, consider the rewards! These will last a lifetime. They returned home nearly penniless, and he had to quickly crank out more paintings for sale. Astounding. This is incredibly inspiring to me. He’s a real encouragement for all of us to think beyond the limits with which we hem ourselves in, and not to give in and hoard our finite supply of cash. OH HOW HARD THIS IS!!!!!!!!!!!

When I commented to him, “Well, I’ll more than likely have to get a regular job at some point here,” he merely shrugged his shoulders and said, “Maybe.” It’s what he didn’t say, his expression saying it all, that I found so refreshing. While other people take it as a given that an alternative lifestyle is all but impossible, creative risk-takers like Adam do not. They are open to other possibilities and encourage me to be as well. My goodness. These sorts of people are so helpful in my quest to stave off a crippling mid-life crisis that seems to be lurking around every corner these days! This is why I am seeking these people out. However, I’m grateful that Adam sought me out in this case. He merely wanted to pick up a copy of my book, offer his support, and enjoy a spot of tea.

I first became acquainted with his work through my wife, an artist in her own right, when she expressed a desire to slowly collect original works of art to display in our home. Being a Neanderthal of sorts, I found it difficult to part with the cash for something “optional” like this. Loving husband that I am, however, we selected a piece that Adam pulled out of his basement for us. Originally obtained for my wife, the piece has transformed into my own. It resonates powerfully with my experience. 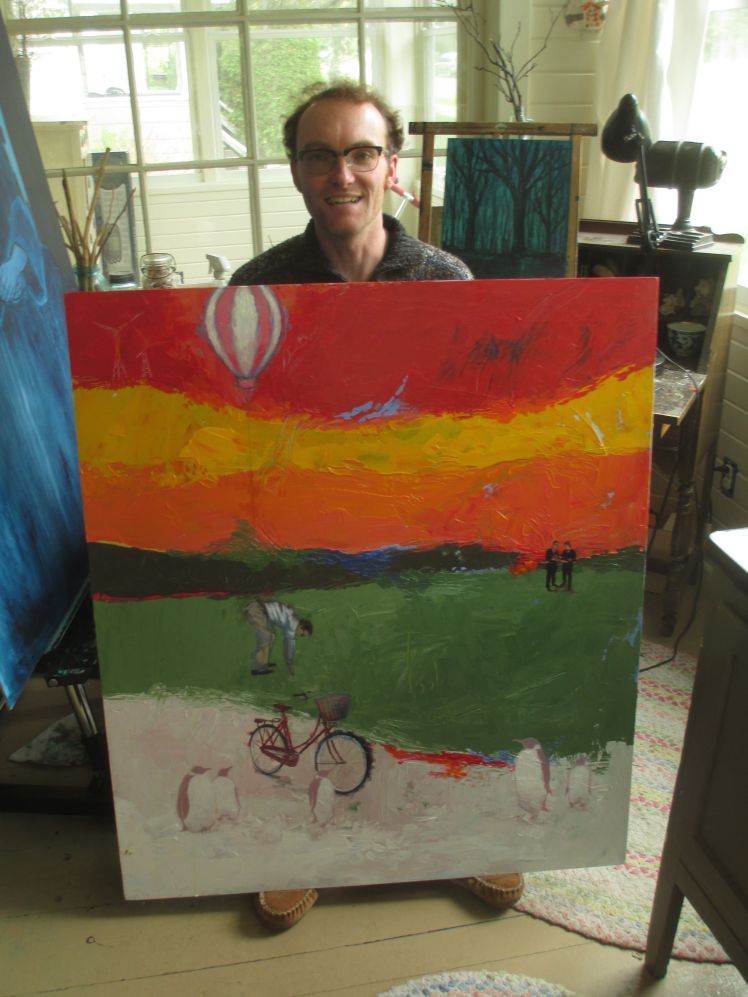 Businessmen making decisions in the background—choices that affect real people—the man held down to the ground while simultaneously being pulled skyward by the balloon (dreams and hopes, perhaps), the bicycle (for Adam the presence of bicycles often represent human ingenuity and our relationship with nature) in close proximity to the penguins, a horizon left open to possibilities, and on and on. I pull new things from it all the time. Often these are primitive feelings. The texture of the paint speaks volumes too, heaped onto the board and scraped around liberally in a manner that hints of Van Gogh. Lets just say that this painting means far more to me than the cash we shelled out to obtain it five years ago when Adam was just becoming more widely known (a ridiculously inexpensive price for an early piece). For us this was a major investment, a real deviation from our normally tight-fisted ways, but the value received outstripped the nominal worth of the currency years ago.

Through my interaction with this artwork, even during a few brief hiatuses when it has been stored in the basement that have  caused my heart to grow fonder of it, I am learning a bit about what art offers to the world. Here’s Adam’s take on the subject:

I think art is important generally because it makes people think about stuff. It gives us a glimpse of the world through someone else’s eyes. It can offer us something contemplative or something energizing. Art definitely has the capacity to inspire people to make changes. Art can make life worth living.

In my work I deconstruct the ideas that are part of our childhood and adult culture. My work addresses the future, fragility of the human presence, perseverance of nature and underlying threads of danger that underpin societies. There is a deep relationship between art and science. The more we learn about our surroundings, where we came from and who we are, the more likely we will thrive in a universe of endless possibilities.

Working as an artist also offers some other things to the world. I am showing my children (and others) that with focus, luck and hard work I can spend my days doing something I love. That is a message that is important for anyone to receive. Of course every person’s means and situation is different, but I do believe we can shape our lives no matter what type of situation we are in. Life is full of trades and compromises, but we have to own those and accept them.

Everyone’s voice is important and art is the best way I am able to make mine heard. There is an art to everything that people do, my focus happens to be painting right now. Someday I hope to venture into film or some other type of thing.

Adam Swanson invites the public to the opening of his latest exhibition at the Great Lakes Aquarium, “The Animals and Me.” The opening reception will be held from 5 – 7 pm on Thursday, May 28th, and is free to all. No need to dress up! Just come as yourself and have fun.

6 thoughts on “Eddy makes another friend! This time artist Adam Swanson is the lucky bastard.”