It’s a cold, rainy day. I’m inside my “shack” enjoying the first fire of the season, and I can’t help but think about my friends toiling away in the fields beneath and within sheets of rain. With boots three times as heavy as normal from all the mud and relentless moisture dampening spirits, I suspect they’ll be ready for warm baths come quitting time at 6 pm.

I shared in their labor for two fulfilling days, and will rejoin them here and there to aid in the harvest for the remainder of the season. Yesterday was a very full day, lasting 12 hours when including a partial commute by bike. I pedaled home with a large squash in my backpack—one of many fringe benefits—after earning minimum wage ($58 for a day’s work).

I can’t recall ever having worked for actual minimum wage (discounting service as a waiter). The experience is a valuable one. It provides an opportunity to taste just a bit of what it feels like to work for $7.25/hr: a remarkably sore back and legs from bending over hundreds of times. I am now in even greater solidarity with Food Farm for raising the cost of a summer CSA share this year for the purpose of paying more sustainable wages, which everyone admits is still not high enough when considering the difficulty of the work. I’m happy to say that my committed compatriots are EARNING more than the mandated minimum.

My actual time on the clock only amounted to 11 hours over two days (be sure to check out my last post), and I rode my bike 50 miles in order to earn a total haul of $79.75, a large squash, and several consumed carrots. For many of the world’s poor this is normal, everyday life. They live on the brink of starvation and homelessness. Money earned is exhausted entirely on food and shelter. While I sit here in relative luxury with a body that feels like it has been through a meat grinder, they cannot rest. They’d be back on the bike today (if wealthy enough to own one) and would eagerly work in the rain so their kids don’t starve.

The field work produced an even greater appreciation and context for what I gleaned while reading The Grapes of Wrath recently. The book takes place not that long ago, when my grandfather was 25 years of age. Desperate migrant workers did back-breaking work without the benefit of a minimum wage. Many watched their children slowly die of starvation. The paltry sum of money earned for a day’s work often wasn’t sufficient to provide for a healthy meal for a family. The reminder, a most vivid one, is that Jesus is on the side of the poor….

Here I am on the way out to the back field (a meandering half-mile ride through forest and a former pasture): 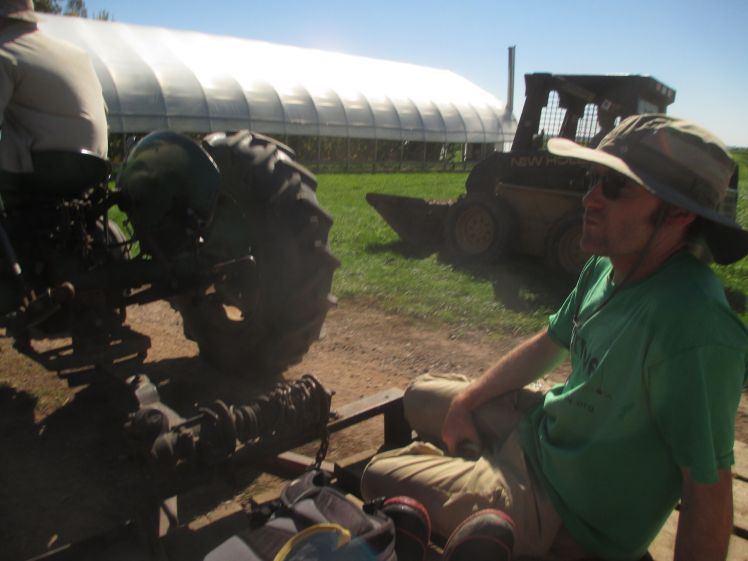 By the way…. Check out that shirt. On the way to meeting my ride in the morning I pedaled up to the facility that was hosting a closed event featuring Cheryl Strayed (author of Wild) as speaker. Due to an impossible coincidence, a large group of people mingled outside wearing shirts the identical shade of green as mine. Since I had a mole in the organization I slipped in among the hundreds packing the building and fit right in! I was there to deliver a copy of my book, destined to eventually be placed into Cheryl’s hands. We’ll see if she does anything with it, but I’m very happy to have had my book handed to her personally. There are many similarities between her story, which became a bestseller and was made into a movie starring Reese Witherspoon simply because she had the audacity to send a copy to the actress, and mine. Thus, this post also illustrates the craziness of the life of a budding writer. We need to engage in guerrilla marketing, pursue interesting and unusual experiences, while also earning a buck occasionally. It’s quite the balancing act.

Here are some of the farm peeps returning with one of several loads of squash: 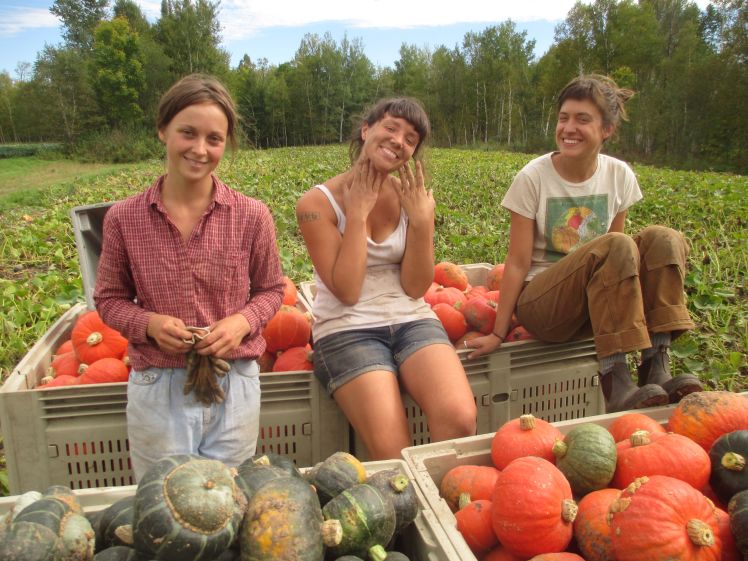 The one on the left, who suggested that I may refer to her as Helga in a future book, met her boyfriend at a folk dance, of all things. The one on the right rooms in a house with folks that play old-timey music. Being a violin player, she’s learning fiddle-style. They play small concerts and jam sessions on their porch and in a nearby field. The middle one, like the rest, is intelligent, sensitive, and interesting as well. These three amigas aren’t terribly concerned with making money or acquiring material goods. I found it rather rewarding to work with 20-something females, actually. On the cusp of forty, married and with children, there is none of the tension that formerly existed when I was young and among a group of girls. With so much of life ahead of them, and few responsibilities to nail them down, it’s rewarding to hear of their hopes as they ponder a world of possibilities—wide as the horizon—that lies ahead.

Here we are bagging hundreds of pounds of carrots bound for the Whole Foods Co-op and Duluth Grill in the prep and pack area adjoining Food Farm’s new root cellar. We also boxed up potatoes, including some scrumptious German butterballs. 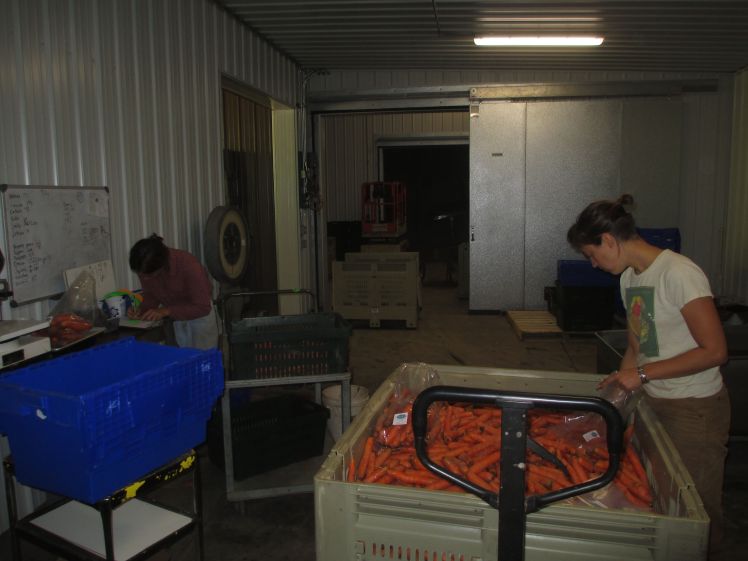 Here’s the pond that holds water for irrigation. One of many necessities and details that most eaters take for granted.

I’ve included these photos solely for the purpose of showing that real food is being grown and harvested by real people on land near you right now. I humbly suggest that you’ll be better off obtaining more of your food from them. It’s healthier for you, for the land, and for the economy (which is to say ACTUAL HUMAN BEINGS). If you missed the earlier posts about Food Farm and of my encounters with other organic farmers in the area, take a gander at my new locally grown category on the right.

Sunset just a few miles from home. Beyond exhausted, but happy…. 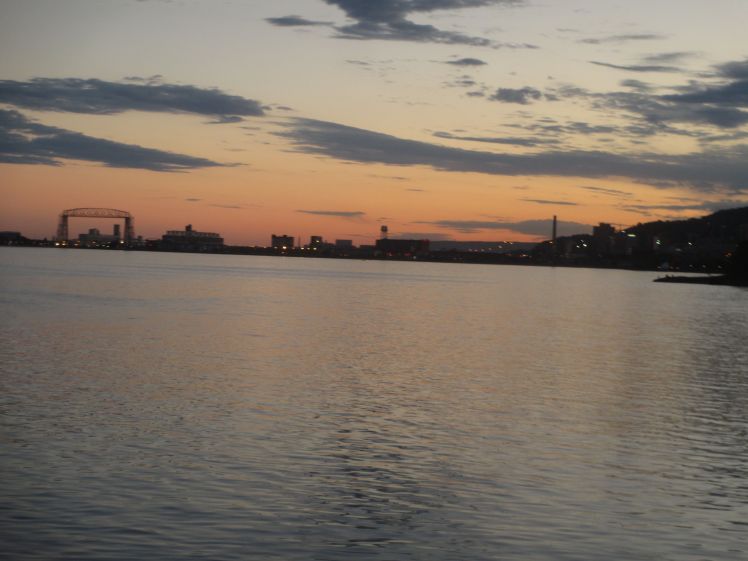