For the first time in who-knows-how-long, the past two days have brought interesting mail: the kind that elicits a response.

If only the mailman knew how much a part of my life he has become! Every single morning I rush out to the mailbox expectantly, almost immediately after he arrives—well, not wishing to appear overly eager, I generally restrain myself until he has entered the neighbor’s yard.

Inevitably my hopes are dashed, day after disappointing day, by dreary junk mail. Utility bills are a welcome respite from the tedium. They, at least, contain a level of mystery.

Three pieces of mail arrived today. Two were addressed to me or the family personally (most unusual), and the other was a menu/ad from a local Japanese sushi/hibachi restaurant called Cloud 9 Asian Bistro. My 10-year-old son is fascinated by Japan, so I’ll give it to him. Some day I’ll enjoy taking him to an authentic Japanese restaurant like this. This type of of expense is unaffordable and difficult to justify for our family these days, but I know it would mean a great deal to our son. Eventually….

I also received a reply from Barton Sutter, the poet I wrote to exactly 23 days ago. That letter was the actual subject of the post I wrote that day, Today’s Accomplishment, which masqueraded as a review of his recently published book of haiku. I’m pleased to say that my primary accomplishment from the 15th of December, written at a time that found me stuck in the same depression within which I remain mired, was a worthy one. Do you feel good about anything you did 23 days ago? Incidentally, 23 days fits within the lower range of possibilities for the number of days for a female kangaroo’s pregnancy. Of course the joeys continue their remaining gestation in mama’s pouch.

It’s interesting to note that though he lives only three miles away, our letters travelled a combined 600 miles due to the US Postal Service’s concept of efficiency gained through the consolidation of sorting centers.

A belated Christmas letter also found its way into the mailbox today. I generally find these fact-driven attempts to sum up an entire year to be profoundly boring and useless. I’d much rather read about that person’s thoughts and emotions occurring at the very moment pen meets paper or fingers strike keyboard. For some reason I found myself enjoying this one, though. The best mass-produced Christmas letter of the year, however, amounted to just a few lines. The writer opened by saying it was the hardest Christmas letter they had ever written, and went on to briefly allude to their battle with loneliness and depression. Honest and vulnerable with no whitewashing, it was great. I even appreciated the mostly empty white page below the few lines. Stark.

This brings me to yesterday’s most unexpected arrival, which was that day’s only piece of mail. It aroused a somewhat welcome feeling of repulsiveness.

Now we all know people who joke about receiving their first pitch to join AARP, even though they remain relatively youthful in middle age. Well, my wife appears to have skipped that by receiving a pitch from the death industry as her piece of mail designed for the old and obsolete.

The funeral home offered her a free meal at a prominent local restaurant in exchange for the opportunity to learn about the many benefits of planning one’s funeral in advance so that your loved ones aren’t faced with the burden when the time comes.

I’ve been to three funerals that took place in funeral homes. Impersonal. Sanitized. Institutionalized. Additionally, the presiding priest/pastor/reverend/whatever had absolutely zero acquaintance with the dearly departed and even admitted as much. I’ll pass, thank you.

Powerful forces institutionalize nearly every significant event from birth to death, and create distance between us and the great tasks that were previously considered a natural, necessary, and even redeeming, part of life. Don’t get me going on the horrific birthing experience we endured when our twins entered the world at a nearby hospital. I envy people with the courage to give birth at home with the help of a midwife…

I’ve been somewhat obsessed with the home-funeral movement (or green burials) for the better part of a decade. Admittedly, this is an odd hobby-horse. Obviously it’s not something to wish upon yourself, family, or loved ones. Nevertheless, it remains a back burner obsession.

My interest derives from a documentary, the name of which eludes me, that aired on PBS ten years ago or so. It featured a family with young children whose mother was dying. She expressed her wish for a green burial. Reluctantly, her husband and children agreed. The resulting film was remarkable.

After the woman died, who had children between the ages of five and nine mind you, the family did not call in the professionals to haul her away and deal with the “problem.” Three days elapsed between death and a casual home-funeral. The father and children all testified to how wonderfully comforting it was to have mom out in their porch throughout this period (it was a cool time of year). It enabled them to gradually say goodbye and come to terms with the reality of their loss. It was beautiful and touching. A real tear-jerker. By the time of the funeral they were mentally prepared in a way that would have been impossible had the body been hauled away, only to reappear later in some funeral home following a professional makeover. In just about any area of life, and death is part of life, the act of leaving something to the professionals has the effect of subtracting the sacred while increasing sterility. After doing some digging, I discovered a documentary called A Family Undertaking. I’m very eager to watch this, and hope to see it in some public setting. Is anybody else interested? Or do you know of a local activist in the area, perchance?

Here you can see the invitation to the pre-planning seminar. Beside it is an infant Marimo ball. That thing should outlive us all. They’ve been known to live for centuries. I recently visited with the 12-year-old kid who sells them through a business called Ben’s Blooms, and held a 15-year-old specimen in my hand the size of a tennis ball. That story will appear here soon…

I rarely make New Year’s resolutions, but this year I made a good one. My goal is to write and mail at least 52 personal letters. I’ll keep track with hash marks on a single sheet of paper, and am currently sitting on three. If successful, next year’s goal could be something crazy like always having a letter en route somewhere in the world.

After writing a letter, my dog and I walk the half-mile to the neighborhood post office you see here. Tillie waits patiently at the hitching post whenever I enjoy the pleasure of walking inside. Walking her down there is like being on promenade with a movie star. While untying her today, and with my back turned, an older lady called out, “What a cutie!” I responded by turning around with a big grin and said, “Thanks! I just showered yesterday…” 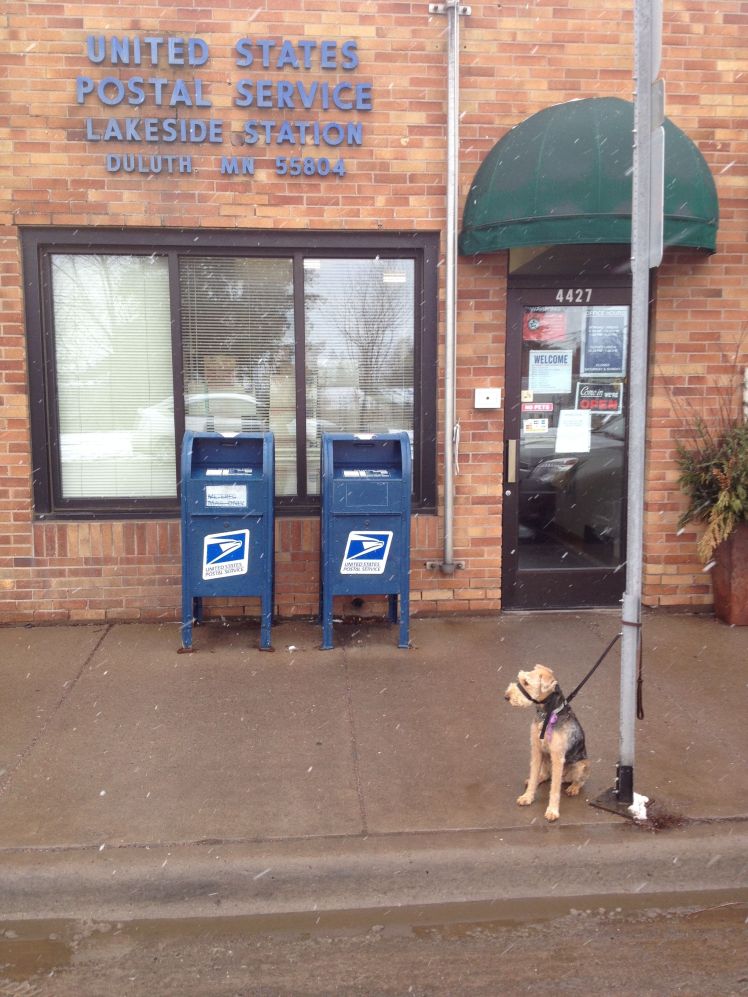 Some bureaucrat in Washington, D.C., hopes to close this office for the sake of efficiency. This would destroy a little piece of me, so I bring them all the business I can.

Speaking of people in Washington, I just sent out an interview request to our Congressman, Rick Nolan. I read a recent article detailing why he was rated as the second most effective Democratic legislator in the nation. I reckon this makes him a compelling subject. I reckon it’s unlikely that I’ll get through the screener, but you never know. I offered to collect him at the airport and visit while driving him to the Iron Range for campaign events, or to have dinner at his place and do the dishes. Since then I thought of something quite a bit more compelling. It’d be fantastic to host a small neighborhood gathering of neighbors where he joined us, shared a few words, visited, etc. I fantasize about convincing the bishop who lives nearby to show up in his full regalia, which would make for some fantastic photography and a great story. This is all most improbable, but it never hurts to ask.

All this, and much more, stems from a few pieces of mail. The tangibleness is touching in a way that the internet can never compete with. I can just about guarantee that you won’t regret sending a letter to someone in the near future. Perhaps you’ll even be treated with an unexpected surprise in your mailbox in another month or so. Cheers!