60 degrees below zero. February 2, 1996. The temperature zoomed all the way up to -36° by afternoon. What a day! On this very memorable day I scaled Eagle Mountain, the highest point in Minnesota. To mark the occasion, and also to lend a little support to a letter I recently sent, I’m sharing a portion of my book, The Emancipation of a Buried Man. Though the season of these snapshots are wrong, here they are anyway. This is a small portion of the view from Eagle Mountain, inside the Boundary Waters Canoe Area Wilderness:

Here’s my cabin, just a few miles away… 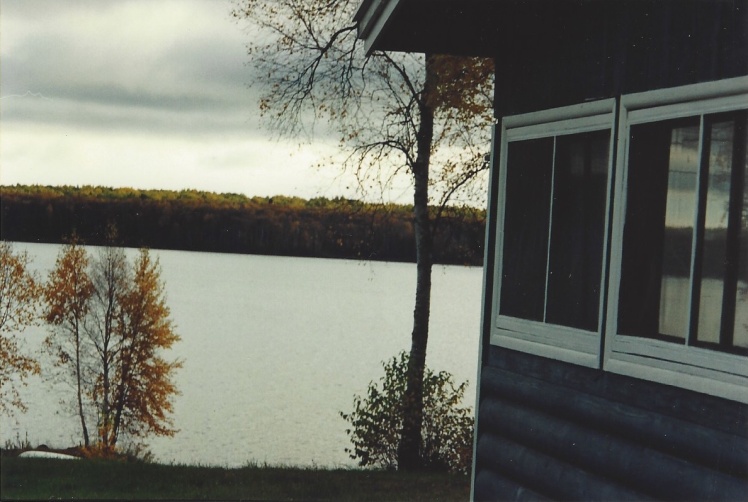 And here’s the opening of chapter 34, Winter in the Big Woods:

I picked the mother of all winters to hole up in a cabin in northern Minnesota away from the normal cares and stresses of the “real world.” The winter of 1995-96 went down as the coldest and snowiest on record to that point. When this occurs in border country it is worth noting. What passes for extreme elsewhere is often a daily occurrence in this frigid realm. For a boy from southern Wisconsin it was doubly extreme and marvelous. I relished each minute of it. Every winter of my life since, and no doubt for the rest of my life, is measured against this winter to determine its severity. It is my benchmark.

My cabin was located in a fairly remote setting well inland from the popular tourist town of Grand Marais and its quaint harbor on Lake Superior. A mere handful of alluring miles separated me from the Boundary Waters Canoe Area Wilderness, which lies astride the international border. I was also a 10-minute drive and a three-and-a-half mile hike from

the tallest point in Minnesota, Eagle Mountain, which is located in this federally designated wilderness. From the top of this vantage point all you see are lakes and miles and miles of untouched forest.

Quiet. Marvelously silent. This is the hallmark of winter in the Northland. I had no access to television, and only three radio stations. One of these was a French-language channel from Thunder Bay, Ontario. The lack of listening options helped me abandon the radio altogether.

A month of riding the rails and exploring the west was the perfect preparation for the quiet of the north woods that awaited. My body and mind had finally slowed enough to appreciate silence. This noiselessness became a great symphony, one with many movements. On paper the train trip was the high point of my nine months away from the bustling world. However, in many ways the great hush of stillness had the greatest impact on my transformation inside the womb. I really do consider myself to have been in a womb as I was reknit together as a whole human being during this period. Often the changes were unnoticeable, but day-by-day and hour-by-hour I was rebuilt.

There were absolutely no interruptions. I had no phone. I received mail at the lodge on the days I worked. Whole days strung themselves together like pearls in which I received no “news.” Major headlines were delivered by the wind. Opening the door in the morning I’d discover that a major snowstorm had blanketed the region. Headlining the gossip column were cheerful chickadees. Pileated woodpeckers—striking in appearance, nearly as large as a crow, and the type Woody Woodpecker was patterned after—loudly hammered out a beat in the standing dead wood of the forest. On one exciting day in late January, I thrilled in cheering on competitors in the John Beargrease Sled Dog Marathon making their way across the lake in front of my cabin. Throughout the day and night they battled extreme wind chills approaching 70 degrees below zero on a brutal 500 mile course (years later it was shortened to 400 miles) paying tribute to the son of an Anishinabe chief who delivered the U.S. mail along a similar route during the last 20 years of the 19th century. John Beargrease had completed this trip weekly, with loads weighing as much as 700 pounds, by dog sled throughout the bitterly cold winters along incredibly rugged terrain.

If anyone wished to reach me they had to use the U.S. mail. This is the form of communication I most appreciate and trust to this day. Coming home from work with one or two letters in hand was a major event to be cherished. I eagerly anticipated receiving these dispatches from the outside world for weeks at a time. They were well worth the wait. I spent hours crafting letters in response as well. This caused my interest in writing to grow, and was ultimately the seed that grew into the book you now hold.

My appetite for reading good books became more voracious than ever. I could easily spend an entire day reading, followed by an hour or two of writing family or friends to tell them about it. The odd thing is that I usually snuggled up in the cabin on mild sunny days with temperatures in the teens or 20s. Bitterly cold days well below zero nearly always found me out in the woods experiencing the cold and loving the challenge. I took pride in my attire while swimming in a head-to-toe sea of wool, fully girded for the frigid blasts.

February 2, 1996 was the coldest day of the year. The mercury plunged all the way down to 60 degrees below zero at a weather station in a nearby community. This was the coldest temperature ever recorded in the continental United States at that time. Our thermometer corroborated the good news that we were about equally as cold. The high that day reached a balmy 36 degrees below zero. Weeks had strung together with the temperature never climbing above 0°F, and this was the climax.

The excitement was almost too much for me to bear. I donned my best wooly clothes for a big adventure: union suit, wool bib overalls, thick wool socks, Steger Mukluks for cozy feet, and a sheepskin hat with earflaps that tied under my chin. I thrilled in snowshoeing seven miles round-trip to the top of Minnesota on Eagle Mountain on the coldest day of winter ever recorded. This kind of thing still excites me. A difficult challenge is incredibly satisfying when you’re well-prepared.

The snow was four to five feet deep in the woods. I cruised along at a steady reasonable pace with my snowshoes. The steeper inclines of the ascent, and later the descent, were more difficult to navigate. The snowshoes tended to slide at an angle into the snow, and I’d laughingly fall into the fluff all the way up to my neck. It helps to have a pair of ski poles along for such a thing. I was able to pole myself back up, after some struggle, back onto my two feet. With the cautiousness that comes after having kids, it seems outlandish

that I ventured out on such day trips without notifying anybody. I also had no communication device for the journey. Getting stuck deep in the woods could have quickly resulted in freezing to death, but the thought never occurred to me. I never felt alone. I considered these journeys to be quality time with my father and protector. Major challenges that might bring some to tears would honestly make me laugh and trust in him. I didn’t get to that point overnight. Perhaps I’m not even there now, but I had been through tremendous adventures with God in that season. He had proven himself faithful. Like a little child bouncing on a father’s knee, I trusted and delighted in him.

At the top I sat in silence as a gentle breeze washed over me on top of the mountain. The wind chills were astronomical (somewhere around 80 below zero). I felt surprisingly comfortable due to all the exertion and the cozy wool that enshrouded me. It was a rather pleasant day, in fact. Bitter cold indeed, but the sun was out and it wasn’t overly windy. As a result of this experience I remain highly motivated to get outside and feel eventful weather like bitter cold, blizzards, windy days, Nor’easter storms on Lake Superior with 15-foot waves crashing into shore, etc. Being out there alone in challenging weather causes your natural laziness to step aside as the stronger aspects of your character emerge.

For all you fact checkers out there, it appears I may have flubbed the one and only “fact” in the book. The record low was a state record, though I could have sworn that it was reported at the time as being a continental record. It matters little, however. On that day I thought it was a record for the 48 (lets even say 49), which heightened the festive atmosphere in my warped mind. It felt like I was participating in history, and I do know that I was the only one at the highest point in the state that day. The trail was fresh, untrammeled, and delightful… That’s all that really matters.