Walking slowly and carefully, I scanned the woods in all directions for any sign of a wolf. Blanketed in white and devoid of leaves and brush, it seemed as if my vantage was absolute. Then—stunned beyond belief—I caught the eye of a timber wolf watching me AND my son. Intelligent. Assessing. At the moment we made eye contact, the animal turned and silently bounded further down the trail. The hair-raising experience evoked no small amount of thrill, wonder, and fear. It was electric. All this within a three-minute walk of the car, located along the edge of a busy public park within city limits!

My son and I had wasted a frigid afternoon. We happened to be near a well-used trail where a wolf had killed a dog just two days prior (see the news story below). On a lark, we took a short stroll at sunset to see if we could discern any wolf sign…

Now nearly a week after the fact, I remain stunned. Enlivened even. I’m grateful for the shared, unplanned adventure and for brushing up against the untamable with my son. We really had squandered a perfectly good afternoon. I felt badly about it. To have it salvaged in such an unexpected way was, and remains, marvelous.

I never see wolves out in the wild. They are more commonly seen from an automobile. Making eye contact is a completely different experience. Northern Minnesota has a very healthy population, but they are incredibly elusive. Occasionally I’ll come across wolf tracks or even a portion of a deer carcass torn apart by the animals, which I consider something noteworthy enough to write home about. It seems inconceivable to have exited the car at this well-publicized location following the encounter, and to have actually seen a wolf inside of a few minutes! And more accurately even, to have been the subject of such intense scrutiny by the wolf. I spend a lot of time in the woods, and this just doesn’t happen (at least we’re rarely aware of it). I reckon we’re getting into mating season and some pretty well-defined territories being established.

There’s something thrilling about having such encounters with wilderness and the wild creatures within it. I chafe at the frequent comments people make about rarely seeing any wildlife, aside from squirrels, chipmunks, and chickadees. This brief interaction between undisputed heads of divergent food chains was a reminder that these animals are aware of us long before we are ever aware of them. I happen to be on the cusp of 40. This encounter shows the value of slowing down and being more expectant. Watching. We very easily could have missed this if we hadn’t been paying such careful attention to our surroundings.

Few creatures evoke terror and hostility in mankind like wolves, and I’m not entering into a debate about hunting them here. Lets just say there is tremendous value in anything wild, the unknowable, untamable, unfathomable. They evoke mystery and wonder.

That said, Leo was a good and friendly dog who seemed to enjoy a happy life alongside Terry. I met them both this summer as they enjoyed a casual stroll down my street. Terry collects and restores classic cars, including a gorgeous Hudson Hornet that occasionally graces one of the avenues in my neighborhood, and I think his attitude and openness about this tragedy have been commendable.

This week I also received a package of wildness from a former neighbor, who picked up and moved to California recently. It was heart-warming to hear that they had thought of my son and me while picking up their dog’s poop prior to mowing the lawn (in February no less)! Prior to their move, they were my son’s only client for his first business, affectionately called, “The Poop Snoops.” Anyhow, they sent us a box of pecans that they had picked themselves from their own tree, which dates back to the earliest years of California’s statehood. 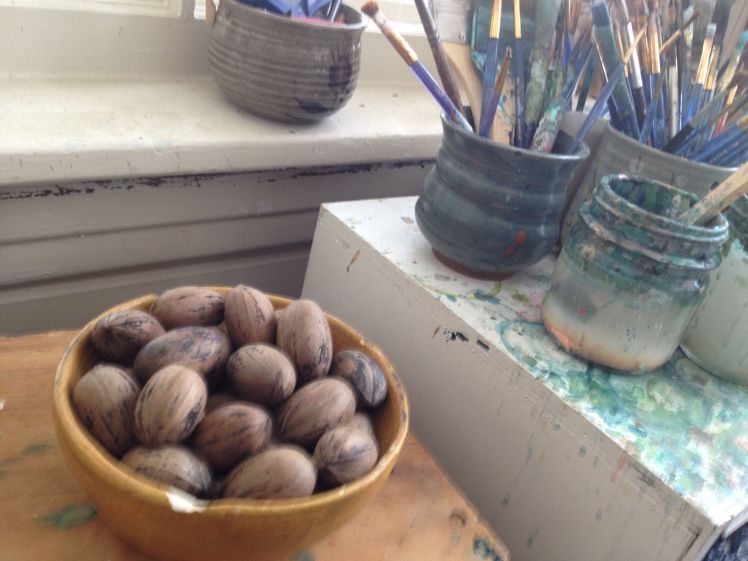 This is what pecans look like in their original packaging. Prior to this I’d have been hard pressed to pick them out of a lineup. It’s good to know what they look like in their wild, unprocessed state. I don’t believe I had even tasted a raw pecan before. These are pretty doggone wild for my palate’s preference, and I look forward to figuring out how best to use and perhaps roast them…

Regular, daily encounters and interactions with the wild is beneficial. We cannot control and micromanage all aspects of life on this planet, and attempts to do so should be discouraged. This applies to almost every conceivable aspect of life. A controlled and domestic faith is anathema, and the same applies to relationships of all kinds—including the Economy (which is best thought of as numerous relationships and transactions between them in the aggregate). Rather, I prefer to think of them as “economies” plural, instead of one big economy with elites in charge. This week I’ve been reading in the Wall Street Journal about a steady war on cash being made by central bankers around the world. They dislike cash, and the only conceivable reason is because they can’t control it once it goes into circulation. There is a lot of talk about stimulative tools being employed by these central bankers, such as negative interest rates. What this means, in effect, is a small tax on all deposits, which is meant to discourage saving and force people to put their money to work.

One reason they wish to get rid of large denominations of cash (the $100 bill is in the crosshairs, and perhaps even the $50) is to make it difficult for people to hoard their bills (all under the guise of thwarting crime). These powerful people across the globe have also been floating the benefits of going cashless here and there for some time. We’re veering into territory wildly removed from this humble blog’s simple goals, but I think it’s pretty obvious that this is about control. With all of their power and influence, it irks them that a significant percentage of economic trade and exchange occurs outside of their influence. While these few lines may be oversimplifying complex issues of macroeconomics, I think we should encourage less centralization. Less control. Less homogenization. Not just one national economy or even one global economy, but gobs and gobs of small, gregarious, and intermingling local economies. It’s definitely more interesting than the sterile, corporate world that seems hellbent on harnessing every last bit and corner that remains of their economic frontier. This is why I support small, locally owned businesses over “Marts” of all forms. And why local farmers are preferable to international conglomerates that wish to take over every aspect of your care and feeding. These micro-economies cannot be controlled or predicted. They enhance our communities and make them vital. The feeling is not unlike what I experienced for a few minutes astride a quiet path alongside my son when we brushed up against the wild.

It’s also somewhat akin to the sprawling, chaotic fort under construction in my front yard by the neighborhood kids. Its size is astounding when considering our small amount of snow. The need for building material keeps them busy while hauling chunks of snow and ice by sled from blocks around. The structure lacks an architect. Arguments and fights erupt over design and style, and ultimately a haphazard structure with many rooms and winding paths consumes the yard. It’s a real site to behold. Beautiful. Imaginative. Interesting. Uncontrolled, it seems to have taken on a life of its own.

Which finally causes me to offer you my recent column in the paper, Drafting young women for war. Do our children belong to the state or not? I’m not looking to get into a big argument here, but suffice to say, it’s hard to imagine my beautiful 10-year-old girl registering for the Selective Service in the not-too-distant future. Perhaps this viewpoint is in the minority, but even if you disagree it’s pretty easy to see that the issue is not being pursued by the grassroots. Where are all the women marching in the streets?  It’s yet another example of elites seeking to dictate power and exert further control and influence, whether society is ready or not.

What is it about me that insists upon choosing the losing side of nearly every controversial issue? Frankly, it’s exhausting! I think it’s just about time for another hike. And a reminder, go see my wife’s exhibit of artwork now on display at the Duluth Art Institute: Land of Wonder. 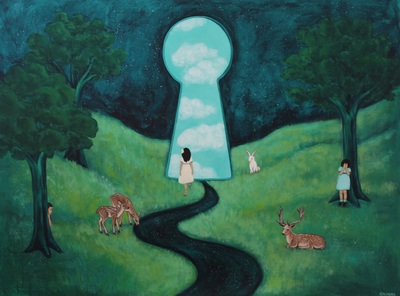 2 thoughts on “Of Wolves and Pecans. The Call of the Wild in all aspects of life”