Hell just about froze over when I made the switch. No, we’re not talking transgender here, but the change was revolutionary on a cosmic scale. You just might have sensed a small tear in the space time continuum, in fact.

I finally broke down, in 2016, and bought a cell phone. Being rather Amish-like in my approach to adapting “new” technology, it was super hard to leave the roughly 5% of folks confined to just a landline. Having previously thrived without any phone at all back when I lived in a cabin near the Canadian border, I never found this confining. Perhaps I even felt superior to all you folks carrying around those annoying gizmos, constantly looking down at them, never experiencing the real world. I had my grandmother’s rotary phone, which contains an actual bell, and loved it.

Now I’ve got more computing power in my pocket than Bill Clinton had in the Whitehouse. THAT’S CRAZY!!!!!! And I have to admit, I love it. It really is a game changer having one of these smart phones. I’ve heard more than one farmer claim that the Iphone is their most used tool on the farm.

The midlife crisis rages on. Just about everything is on the table. I need to change in many areas, and sense a strong need to whittle life down to the essentials and FOCUS: father, husband, farmer, writer, friend, child of God.

During a recent trip to an impressive scrapyard, my friend and I felt like Sanford and Son as we drove up onto the tipping scale with an old van and trailer. The guy waiting behind us was pulling 65,000 pounds of scrap (who knew that was possible?). My little operation felt pretty ridiculous, but I did clear out some distractions, while also netting $57 in the process.

It was super interesting with all the trains, cranes, and ships around. The super touristy part of town, Canal Park, is just a half-mile in the distance across that open water. The scale of this place is amazing.

It’s essential to focus on others, rather than myself. While striving to find my niche in the community, I want to be useful. Too often I feel obsolete like all this junk waiting to be melted down. I try not to dwell on that, feebly pressing onward. 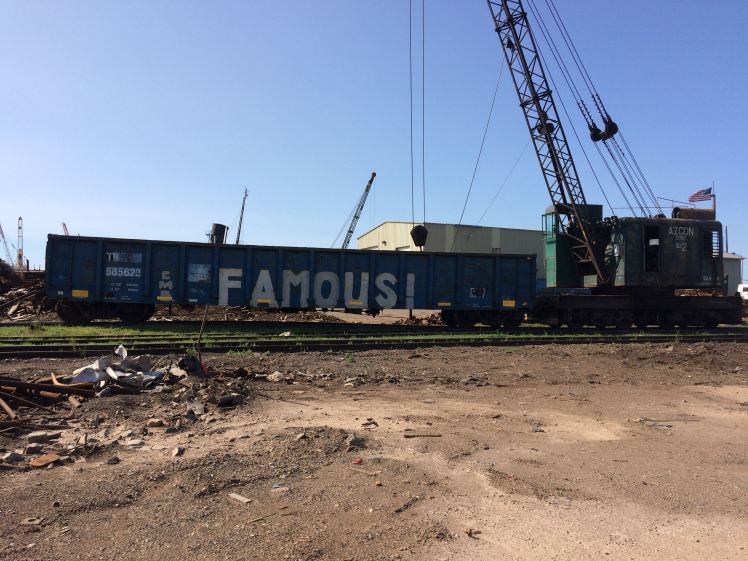 It’s difficult to balance finding my niche while also feeding a family. I’m currently working three full-time jobs, essentially, and feel behind with all of them. My main job these days is as a farmhand, which is providing valuable experience. The farm’s owner left me in charge of the place for two weeks while she was in Europe recently. My own farm was sort of put on hold. I’m painting a house for some cash-flow as well.

I’ve been so busy that my first harvest at my budding urban farm, Tiny Farm Duluth, completely caught me off-guard. 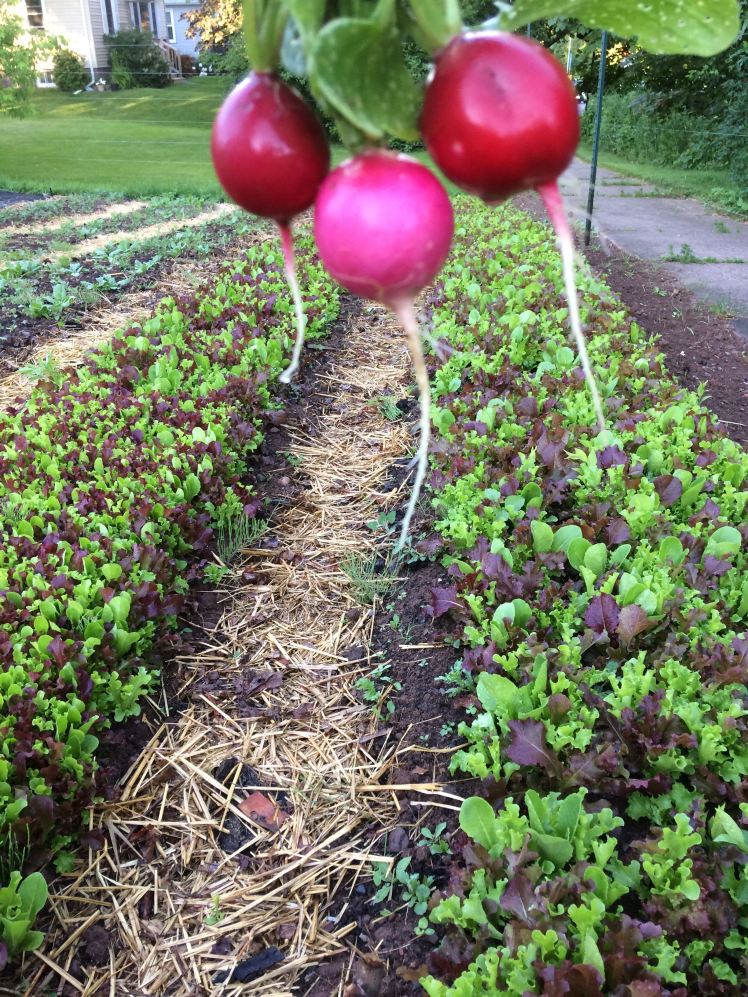 It’s rather comical, but I’ve been schlepping lettuce and these gorgeous Easter Egg radishes around, often with a cooler in my bike trailer. My small deliveries have grossed between $3 and $12. I realize it’s kind of asinine, but you’ve got to start somewhere. This morning I’ll be harvesting for my very first delivery to a restaurant, Bulldog Pizza. Man, are those folks ever supportive. I left our little meeting resolved to get more things going. Between running the other farm while my boss was away, the side job of painting a house, and messing up the seed density of my other crops with a precision seeder, I had given up on turning a profit this season. However, this small harvest has inspired me to redo some of these garden beds so I can offer more to my super small customer base. All of the beds should look like the lettuce, which retains moisture and crowds out weeds. Above that lushness you see the spinach. In those two beds the seeds became clogged in the seeder, so they were only planted sporadically. The only way you’d know would be to weigh the seed bag before and after planting, because you can’t see the seeds going into the ground. I should have turned these under a couple weeks ago and started over. In this business you have to identify failures quickly, and start over. A lesson for next time… 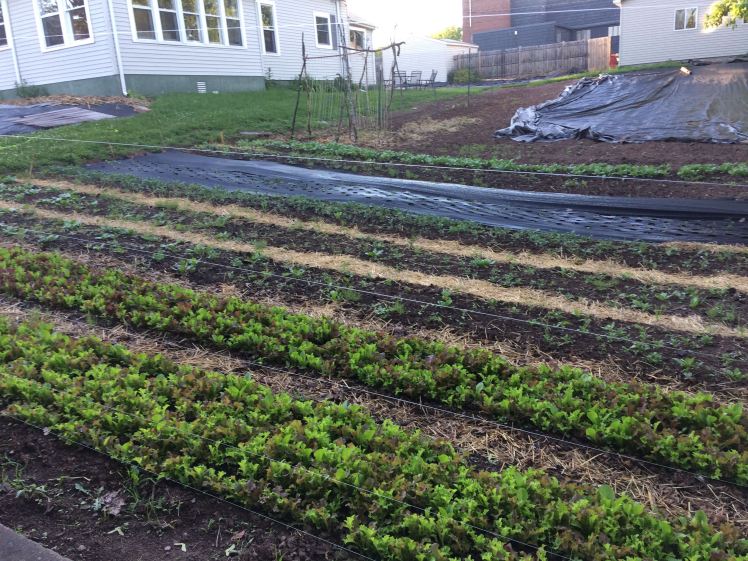 I’ve run into some obstacles with rock in that area under the tarp, which covers 2,000 square feet. The adjoining plots, still in the process of being smothered, are more promising for the future. For now, I plan on putting a cover crop into that area while slowly figuring out how to proceed.That’ll buy time while building soil, suppressing weeds, and attracting beneficial insects.

My wife has a splendid art exhibition at the new Lakeside Gallery, located next to Amity Coffee, right here in our neighborhood. The pieces will be featured all summer, and I think she’ll have a permanent presence there going forward. I missed most of her opening on Saturday, desperately needing to paint that house, and showed up filthy near the end. I just love that I feel comfortable going into this place dressed like a hillbilly. It isn’t the least bit pretentious. Art should be accessible to the common man, and this place goes a long way toward accomplishing that. Along those lines, Shawna has prints available for $25 down there, super inexpensive greeting cards are in the works, and small original paintings (not appearing in this image) for around a hundred bucks.

Watch for my column in the paper this weekend. It’s a good one about a $90 turkey we’ve been consuming that cost me nearly two days of hard labor last Fall. I’ll post that story here next week.