The city needs surrounding rural areas just as a rubber tire requires a metal rim. Neither will truly thrive without the other.

Living in the city, as I do, my wellbeing requires a regular inoculation of the country. And by country, I don’t just mean the land, although it certainly includes that. The people who live upon and from it are every bit as interesting as the land itself, but when you get right down to it, even the land—the soil itself, if you will—is one amazingly complex community consisting of billions of microbes, funguses, and far more than we’ll ever understand, all interacting with their environment. So by the land I’m referring to a vast ecosystem, of which we are a part, and not just a pretty landscape.

Yesterday I journeyed out to procure a winter’s worth of grass-feed beef and pork. The day’s adventure nourished my soul. The satisfaction of stocking up on so much quality food from a source I trust, 4 Quarters Holdings, is immense.

I visited with seven entrepreneurs on this particular journey, most of whom were farmers, but I also spent some time with an artist who lives in the woods. My motivation for these conversations was to get some ideas to organize our family’s finances, which come from four sources: my wife’s burgeoning art career, my book and various writing jobs, interior and exterior house painting, as well as my urban farm. It’s a lot to keep straight, and my organizational skills seem hopeless at times. I need a dead-simple system to keep track of our finances, business receipts, etc, so I sought out some advice from other people who don’t have conventional jobs.

Many of my questions might seem intrusive to a fly on the wall, but I’ve cultivated a relationship with these folks. They know my family is in a tight spot, and are happy to share what has and has not worked for them.

It’s wonderful to have friendships outside the city. Each of their homes might be considered a joyous destination, even if I do only make the trip a couple times each year. It all stemmed from joining a CSA, living out there for a few days while seeking to learn more about where my food came from, eventually working at the Food Farm for a time, and voraciously venturing further down the local food rabbit hole.

Bonafide culture, which nourishes a community, includes art as well as food production. A community which cannot (or will not) feed and entertain itself can hardly be called a community at all. The fabric of local lore is woven in large measure by artists and storytellers. 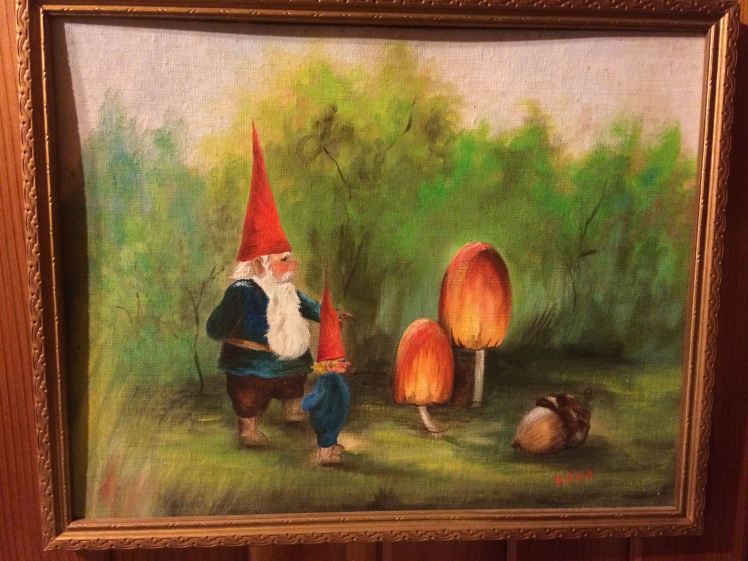 I was taken by this painting at the artist’s house, signed simply by, “Nana.” It was gifted to him when he was just six months old. Hazarding a guess, I’d say that was 38 years ago. The painting hangs in a happy home. We should all want the people who feed and entertain us, and thus help make us happy, to live joyous lives themselves, outside the clutches of poverty.

Later I picked up a gallon of maple syrup from a guy named Christopher, who runs a side business called SpringLight Maple. I’ve sourced all my maple syrup from him for nearly two years now. I believe he purchased the land about a year before I stumbled across his sign advertising syrup out on Hwy 4. It’s always fascinating to make note of the changes that have taken place since the last visit. He built his own driveway to access the property, cutting down a bunch of oaks in the process. These he had milled into usable lumber, which he has kiln-dried himself in a homemade solar kiln, and is now using the lumber inside the house currently under construction. Since moving onto the property he has lived in this tiny garage, and is now a newlywed.

His bride enjoys living in this small space with him. Evidence of bootstrap frugality abounds. They’ll continue to live in the tiny garage, happily, for at least another year, and with minimal debt. It was exciting to see their future home completely framed up and covered since my last visit, about a gallon of maple syrup ago. How can one not want such salt of the earth to succeed?

Next I dropped in on Catherine, and was stunned by the sight of her recently finished home, which is located on her small vegetable CSA farm. Once again, it should bring us joy to see the people who feed us be nourished themselves, and to live in a comfortable home of their choosing.

You don’t get this feeling when your food and entertainment is metaphorically beamed to you from the mothership, somewhere out there, but who really knows where…

Do you wish to be fed by corporations or by people you can actually visit. Farms that welcome visitors, which aren’t surrounded by barbed wire and NO TRESPASSING signs as a deterrent to consumers discovering just how revolting the conditions actually are. Or back to the realm of entertainment, instead of seeing hundreds of millions of dollars funneled into far-off corporations and “stars” who do not share your values, perhaps this money can be spread out a little more broadly throughout the countryside to the people who truly make America great.

Then we’ll see more healthy farms atop healthy soil, a thriving community of artists and entertainers who help make life more rewarding and interesting, and an economy—both rural and urban—that benefits the health and wellbeing of everybody.