It was a BBC day. Hitting all three critical areas is essential for the unemployed, and keeps spirits high.

All three are vital. At 5:00 am I arose to nearly complete chapter 9 of my upcoming book, which is about growing up in a crazy house filled to the brim due to an extreme hoarding problem. The hoarding was severe with piles nearly reaching the ceiling, and abject squalor of every conceivable kind was present. Due to deprivation in the squalor, however, I learned to appreciate simple things in life that most people take for granted.  There is also an expose on my bedwetting that went on through my 18th year, unbelievable tales of growing up with 100 animals in my bedroom due to my own hoarding problem, too many crazy stories to begin to list, and ultimately how I became whole and learned to be a human. The latter is still ongoing!

Shifting gears early on, my daughter had to be across town at zookeeper bootcamp this morning. Not being one to waste a drive of any duration, I embarked on an incredible bike ride over a roughly 40 – 45 mile loop. Starting at the Munger Trail terminus behind the Munger Inn, I biked down Grand Ave until it crossed the St. Louis River and turns to Hwy 23 (aka the Scenic Route). A two mile climb straight out of the Lake Superior Basin, while clipping the extreme edge of Jay Cooke State Park, rewards one with bright horizons that to me represented limitless opportunities.

Continuing further down the road the dense forest gradually gives in to a distinct agricultural bent that I really dig. Being up here in the north country, I don’t get to dwell among small family farms very much.

Less than an hour into the journey the Alex Laveau trail appears, and for the rest of the two and a half hour journey I basically left all roads behind. This trail, being only seven miles long, is the lesser known cousin to the Munger Trail, but I find it to provide far more visual interest. The farm country interspersed among the forests and occasionally rocky terrain is outstanding. It isn’t like being in the Rocky Mountains, but the persistent subtle beauties continue to trickle into your soul the entire time. Having arrived as an empty vessel, I left completely filled, and the boost remains with me.

Berry picking opportunities melt the heart of even the crabbiest among us along the trail, and the very few oncoming bikers are kindred spirits to be welcomed with the warmth and love reserved for a long lost brother or sister.

No significant roads are crossed, but the very few that are conjure up John Denver’s classic song, Take Me Home, Country Roads.

The village of Wrenshall is a hidden gem around here, and remarkably close to Duluth. I would love a t-shirt that proudly exclaims WRENSHALL ROCKS!

I rode the trail at half speed in order to let the unique surroundings seep in. It’s my second time doing this particular loop, and I can see this is worth doing at least once per year. Joining the Munger Trail in Carlton brought an entirely different experience with dense forest and more rock. This was a pleasure as well, and especially since the entire remaining 15 miles back to Duluth are virtually entirely downhill on an old railroad grade that causes the huge loss of elevation to be rather subtle and spread out over many miles. Here a 108 year old bridge spans the St. Louis River. 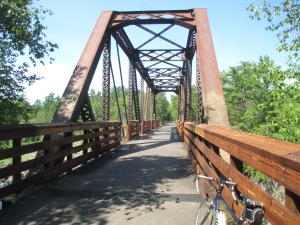 Learned something today as well. Here lies the last significant stand of eastern hemlock in the state of Minnesota (Hemlock Ravine). There are huge stands in the upper peninsula of Michigan, but they aren’t as well suited for our unique climate and soil conditions here. I didn’t know we had any left, but here’s a 50 acre restricted site for their protection. The thinking is that as the climate changes they may do better in our neck of the woods, so the genetic diversity is worth preserving. Unfortunately half of them were lost due to the massive flooding of 2012. 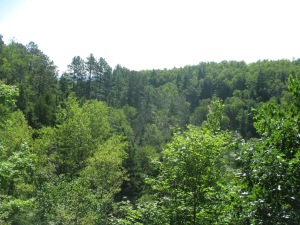 If you’ve made it this far, you deserve this following tip that’ll change your life. In the picture below you can see where the Superior Hiking Trail (SHT) turns away from the Munger Trail. This is located about a half mile or so from the Becks Road parking area, and is directly below Ely’s Peak. Well, there is a second secret trail that leads to the incredible railroad tunnel that goes through Ely’s Peak. This other trail lies to the left of the SHT.

You can read my epic tale of taking the family there on Father’s Day a couple years ago here: Adventure Begins When Things Go Wrong

We weren’t able to get to this trail at that time, so your trip will be far easier!

Here are some pics from the final descent into Duluth. As you can see, any family could do this. The rock cut is impressive, and then there’s the first sweeping view of the city. It’s a great trip, and there are zero major roads to deal with. The trail goes over or under the only two large roads it has to cross.

I almost forgot COMMERCE!!!!  I padded the family’s wallet a bit by participating in the nations economy today!  This isn’t something to take for granted, and I’m grateful to my neighbor for trusting me to paint their garage and house trim.

4 thoughts on “Alex Laveau and Munger Trail Extravaganza! Also, BBC is the best rx for the unemployed.”