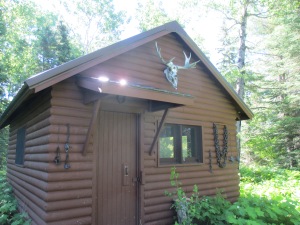 This cabin guards entry into the United States. It lies a literal stone’s throw from the Canadian border, and is my private home away from home. I call it “The Pigeon,” because it lies on the famously historic Pigeon River near Grand Portage, Minnesota.

It is very difficult to travel to, but once you’re in it’s a unique one-of-a-kind experience. Here are the stripped down accommodations: 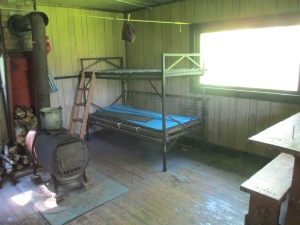 I stumbled across the place during a rainstorm nearly 20 years ago. The warm fire and wool socks taken down from the clothesline were a real boost on a chilly day. Since then I’ve been back several dozen times, mostly in winter and fall. This is real cabin life, or perhaps the word shack applies better. Here you embrace a bare bones minimalism that emphasizes the things that matter to you over possessions, busyness, or a frenetic lifestyle. I have repeatedly met with God here. Often it takes a full day to slow down inside enough to do so, but I’ve typically left changed in some way. This place is a permanent reminder in my soul to stick to the basics like knowing and being known by God and my neighbors. Loving and being loved. Raising kids in a peaceful (working on it!) slow paced home where we’re never too busy to care for each other and our friends, family, and neighbors. Simple living, reducing life to its simplest and most basic units, awareness of the beauties of the natural world, true freedom, and on and on. Basically these are things one would reflect upon on their death bed. Being here enables me to sense the real REALITY here and now.

It has been four years since my friends and I have been here, and I went on an exploratory mission on the 1st of July to ensure it’s still there prior to engaging in an epic six mile ordeal to get back there this upcoming winter. I do not recommend making the journey in summer, and I will never do it again. I was so filled with ticks, mosquito bites, and scratches from the thick brush, that I was hoping to find that the damn place had burned down. I was pleasantly surprised to find in top-notch condition. As you can see, the handful of folks that use it try to maintain it somewhat. Only two small parties used it last winter, and we share a deep love of the place. There are no reservations. Here are some pictures. The river runs in front of the cabin, and Canada lies on the other side. 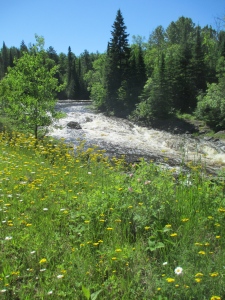 I followed the river from upstream here in the brush. It was hell on earth. The most encouraging moment was finding a large fresh pile of moose poop. Seriously, this lifted me up because they are an increasingly rare site. It took me nearly an hour to travel a half mile through dense brush wearing nothing but thin running shorts and a nylon t-shirt. Misery!

These cascades are just 200 yards from the cabin and the bend in the river. They carve a deep slice into the earth’s crust to create an impressive gorge that’s nearly impossible to capture on film adequately. 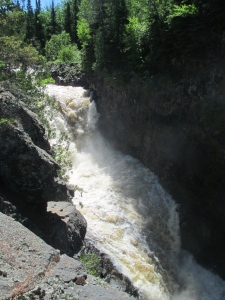 The Canadian topography is breathtaking in the fall, and provides a tremendous unimpeded view of the rocky cliffs in the winter. There are no signs of humanity to be seen anywhere: 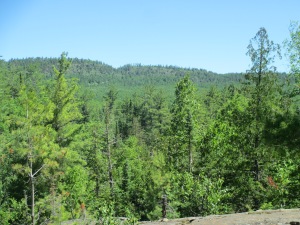 Here you can just barely make out the roof of the cabin above the river right above the bend. I love it.

I carried home a 16 inch spike that formerly helped hold together a massive sluice from the early part of the last century that diverted water around these cascades so huge logs could be safely floated to Lake Superior where they were floated down the lake to lumber mills for processing. When I first discovered the cabin the base of the sluice remained and I thought it may have been the remnants of an ancient unsuccessful 200 year old road (Selkirk’s Road). My imagination ran wild with possibilities at the time! Since then I’ve seen the pictures of the impressive dam, and there are remnants of the waterways used to divert the logs around the cascades. The exploration possibilities are endless here, and over the years I’ve discovered much.

Not sure why, but the Border Patrol went through the trouble of inserting this boundary marker into the rock some time in the last couple years.

I picked my way home by tiptoeing through deep mud and water to complete the 12 mile round trip odyssey. Weeds were knee and thigh high, and concealed horrible muck of the lose your shoe variety. At one point I prayed that I’d come across the old logging road I was aiming for soon because I couldn’t take much more of the difficulty, looked up, and there it was!  Returning to the car I pulled off my shoes to discover dozens of ticks had bored into my wool sucks. YUCK!!! Hate those things. Winter and fall only from now on!

2 thoughts on “My Secret Cabin Deep in the Wilderness”