This week I found myself, somewhat reluctantly, attending a theatre production that included an Eddy Gilmore character. I expected to gain nothing from the experience. Blessed beyond belief by an atmosphere of utter richness, I left with more wealth than could be carried by pockets, wheelbarrows, or even an armored truck could be expected to carry. Being there on this particular night could not have been timed more exquisitely.

Honestly, for me, it is on a par with the beauty I encountered in the recent death of our family’s dog, Tillie. That particular day remains lodged in my memory as remarkably meaningful. In fact, if the whole of my experience with the animal was distilled down to the moment of her passing, it would have been worth the time and treasure that were devoted to her.

That day I was working away from home, unavailable for most of the day. Tillie smelled like death. My wife couldn’t deal with the stench, and put her outside. Thousands of flies were drawn to the smell. Countermeasures were employed, but it was a desperate situation. This was real suffering. I received texts throughout the day imploring me to facilitate a final trip to the vet. Necessary work at the farm prevented as timely an arrival as she would have preferred.

Late in the afternoon I stepped across the threshold to our back porch to greet the dog, who had been unconscious all day, and she immediately greeted me by standing up on all fours. Briefly I held her in my arms, she lost consciousness, and gradually her breathing just stopped. All this happened within the span of two minutes, at a time when I was going to drop her off at the clinic like some sort of burden for somebody else to deal with, after which I’d immediately hustle off to another job. Instead, time stood still. I dug a deep hole. The evening spent with family was deeply touching and healing for everyone. Since I’ve already written about that, I’ll spare you further details.

Once again, experiencing the theatrical production of One River at the moment I did, was just as meaningful, and seemingly divinely timed.

Many things have just now come to an end. That very same day, due to the seasonal nature of farm work, my part-time job at Talmadge Farm ceased to exist. My friend and I had also butchered the 11 chickens that remained of the 100 that I had so carefully shepherded through an epic storm and loss of power on the very night of their arrival, only to lose nearly all of them in a single evening to a gang of predators. Here is the very last chicken. This photo was taken after the heads of the others had rolled. Observe how content and at peace she is, though the savage act of butchering was occurring a mere 15 feet from her. She really appeared to be having a pretty good day right up to the very end.

The only real thing keeping us afloat financially, painting, also came to a temporary stop, as I completed my last big project on the books. I am a reluctant painter, applying brush and paint solely for the cash, and yet find myself continually surprised by encountering beauty in and through such menial work. Even at the dump. That’s right, I pretty much spent two solid weeks at the dump, painting three large garages at the Materials Recovery Center. Hungry for cash before winter, I profitably completed this job for several thousand dollars less than the next lowest bidder.

Being such a busy place, I often labored after hours, working until dark. At such times I found the place to be both beautiful and peaceful. The sky was a source of consistent wonder. I toiled alone for hours under fantastic cloud formations and a great big sky. Some feel pretty puffed up about being granted a key to the city. I, on the other hand, feel pretty special to have been entrusted with a key to the dump. Unfortunately I’ll have to hand it over one of these days. 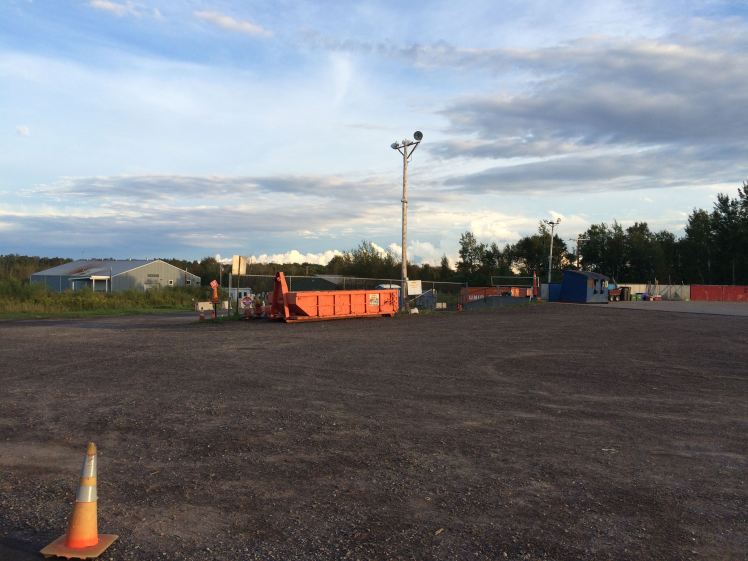 Captured some vitamin D at times: 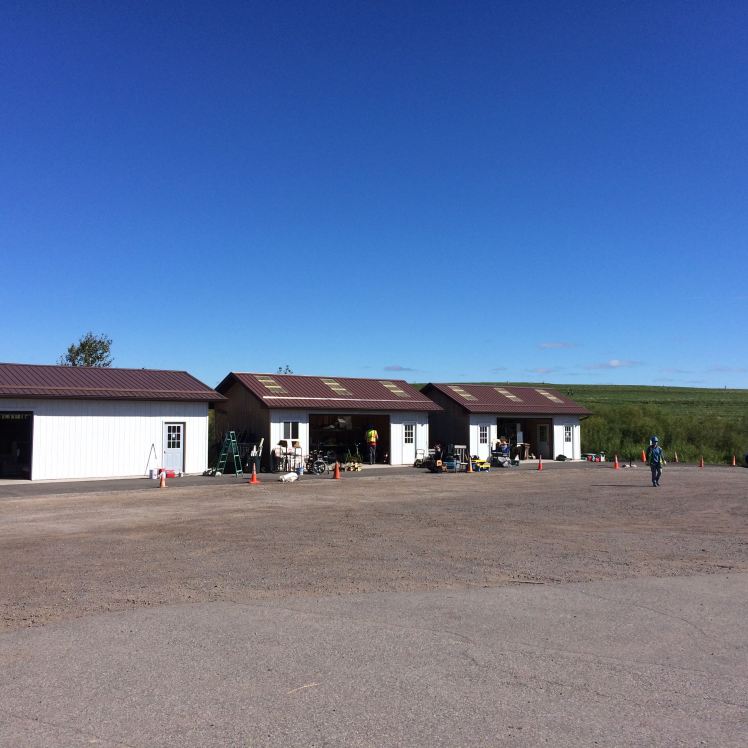 I brought home a new friend on the day I painted the previously neglected wall in the background:

And finished the job after the sun set, feeling sicker than a dog, as cloudy dampness seemed to envelop everything. 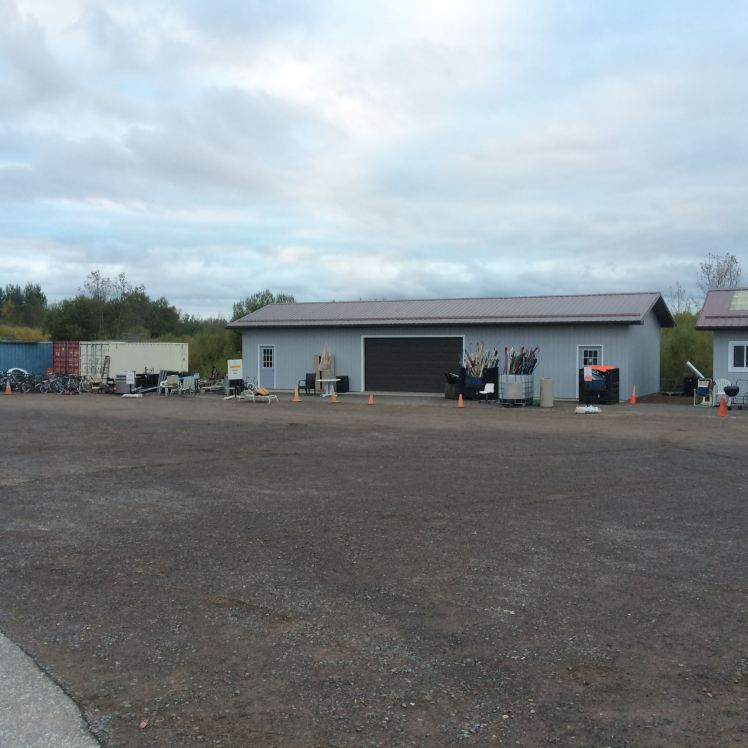 Two days later I had recovered from an awful cold, just enough, to attend this play. Afraid to pass along this illness, it was with some guilt and trepidation that I shook the hand of my doppelganger. I am the shiny, handsome one in the photo.

Being at such a crossroads, with few prospects looming on the horizon, it was incredibly touching to experience this play. Luke Harger, who played Eddy and several other roles, captured me at my best, though we had never met. Amazing….

We made eye contact at one point during the production. I could tell he recognized me, and I was super uncomfortable. Luke never missed a beat. This is what most impressed me about the entire cast, in fact.

The cast of 11 positioned in front of their real life counterparts:

The small theatre holds an audience of just 100, so the production occurs just feet away from the audience. I would find this distracting, and succumb to self-consciousness, but these folks continued to emote powerfully. You can’t get away with shoddy, insincere acting in such a place. As a writer, I often write about some pretty vulnerable things, but I have never allowed myself to be as laid bare as these young actors. It was as if their very souls were exposed to the light. This is a level of exposure that I have always shied away from in such situations, but these theatre people absolutely live for it.

Frankly, I have never really experienced theatre until this performance. It is as if the veil has finally been removed from my eyes. I actually get it! Inured to the special effects of Hollywood, few of us are exposed to the incredible performances engendered by theatre. In some ways, the effect was life changing for me, and that’s not just because I was cast into it.

This has to have been the most passionate, dialed in group of college students I have ever encountered. It seems to stem from the fact that they are doing what they love. Not at some distant point in time to be prepared for, but right now. The concept is so simple as to be extraordinary. Something to emulate. This collective passion, and absolute thrill in doing what they love, also has produced a tremendous chemistry between the cast members that is evident both on stage and off. This is absolutely what I am after in life, and in community. To be reminded of this on stage, at a time when I am sort of standing in the middle of the road wondering where I am supposed to go next, was beyond marvelous.

They concluded the production, which included numerous stories from people far more interesting than myself, with the paragraph below. It is from my blog post about journeying to Whiteside Island , dramatized in One River:

I poured a lot of myself into understanding, and into actually entering this one little portion of the Story. Without a sense of place, there is no story. Without a story, there is no sense of place. Wherever you live, I urge you to enter into that story. Delight in sharing it with others. Become part of it. Help to shape it as even now the story is being passed along to the next generation. It’s always in motion. Rather than fight the current, perhaps use it to help shape the contours of a narrative continually in the process of being written, even at this very moment…

Actually seeing the process of entering into the story, dramatized on stage, mere feet away from me, could have absolutely brought me to tears. This is the direction I must take.

Thank you so much, cast of One River, and to Tom Isbell for writing it. Tom, the playwright, took an incredible risk in taking on such a project. Frankly, I think he was crazy. The whole idea was ridiculous. The One River, Many Stories project lacked any structure, form, or rules. It was complete anarchy, as storytellers and journalists went around and did their thing. What a mess to have to sift through, and make cohesive!

Wherever you live, go see a play. It just might change your life. Become immersed in local stories and storytelling. Far too many of us are Amusing Ourselves to Death through an engorgement of corporate entertainment and media that lacks any root or attachment to place.

One River has five showings remaining at UMD, running each evening from October 4th – 8th. Secure your tickets here.

4 thoughts on “Entering the story, painting the dump gray, and the last chicken”