Our home is on the cusp of entering its 107th year. My family is just the fourth to live here, and this is not uncommon on our street. Numerous folks spend the majority of their lives here, which has made for a tremendously desirable, stable neighborhood.

I’m aware of two former notables: a U.S. Senator out of Idaho lived here as a child, and has some big dam named after him out there, and Richard Gastler, who bought the home with his first wife from the 2nd pair of owners in about 1962. Dick came to visit, unannounced, on several occasions after we bought the place from his ex-wife in 2003. He loved to chat and reminisce, so I gave him as much time as he needed. Tears inevitably came to his eyes as I’d show him around. It was quite touching.

A couple years went by without a word. I intended to call him up to show our progress on some things, but never got around to it. Then he died. I learned about his passing in this column over at Perfect Duluth Day, and was stunned to see how beloved he was by the community. I knew he had been a teacher of economics, history, and civics, but didn’t realize he’d be missed by so many people. He appears to have been one of the most colorful teachers to have served in these parts, and even appeared on Good Morning America for his antics. I wish I would have carved out time to have him over more, but appreciate the conversations we did have. This home meant so much to him, and still bears his marks, even though divorce forced him to leave in the early ’70s.

I pondered this while tearing apart the room he built in the basement for himself as his marriage was crumbling. The old garage also contained about 14 ancient doors he collected, all of which are marvelous, but are cursed by having too much character to be dispose of them, but are too impractical to be of much use. Gastler had hoped to panel a wall or entire room with them one day. I still find myself trying to get rid of these doors, and chided him for the burdensome collection on more than one occasion, which brought guffaws from us both. Here, one of only two remaining from the collection, is an amazing, unbearably heavy old door. Perhaps it’s made of oak. This thing is a real beast, well over 100 years old, and is the sort of door to which I imagine Martin Luther nailing his 95 Theses at the Wittenberg Castle Church in 1517. I reckon I’ll try to sell it, and place the proceeds into the family’s puppy jar (we’re already halfway there!).

We each shared a love for old homes, history, and the community. I still wish I had carved out more time to get to know him better.

I discovered these newspapers up in the attic of the old garage, while rescuing those ancient doors prior to demolition. I love the tagline in the upper righthand corner: The Morning Newspaper of the Northwest. Duluth, Minnesota was still considered part of the Northwest in 1938! It wasn’t much earlier than this when vast tracts of land were considered territories, sometimes disputed, further west. Washington State was admitted to the Union just 49 years prior. Anyhow, this was a surprise to me. This area was considered the gateway to the vast, largely unexplored Northwest back in the fur-trading era, and it lingered for some time apparently. So much history… 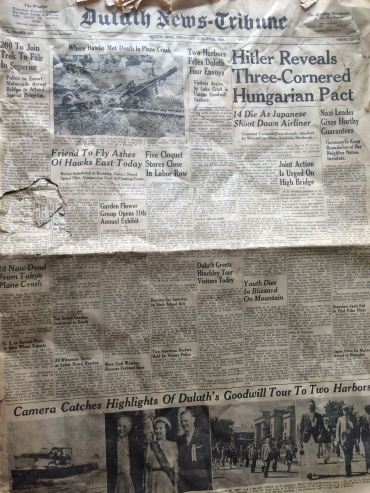 When this same newspaper called about a week ago to say they wanted to do a major story about my wife, artist Shawna Gilmore, and her home studio, it couldn’t have come at a better time. I had already dropped everything in a laser-like focus to get our lives into order, and this would only speed the process. What otherwise might have taken 40 days or more, was whittled down to just four. Shawna’s parents came to help, and we painted just about everything downstairs, stem to stern, and on up the steps to our upstairs hallway. For the first time in my life we have zero clutter in the majority of the living space. It is fantastic! I grew up in a household with a case of extreme hoarding (see my book, also available on audio or kindle for the clutter-averse), so this has been a lifelong goal. I finally reached the point, being 40 and all, where I’ve realized that I don’t want to spend the rest of my life pining after this goal. It’s time to just do it. We still have the basement, bedroom, and garage to go, but we’re nearly done.

In a chicken and egg sort of scenario, I’ve learned that one of the secrets to keeping a clean house is to actually have a clean house. One stray piece of paper really looks out of place when you live like this, so it’s easy to stay on top of things. Previously I’d get to 80% clean, call it good enough, and discover that clutter always breeds more clutter. That should be a law of physics, and the effect is that we can’t live up to our full potential when our minds are cluttered to such an extent. The physical mess is indicative of an inward discombobulation. Similarly, when rats took up residence in our backyard earlier this year, I felt that it was just an outer manifestation of our inner chaos. I still feel that way, and have taken drastic steps to order my life. By removing so much crap from my life, there will be more room for the people and things I truly cherish. I am acutely aware that I need to change in many ways, so I’ve found it helpful to start by cutting out most things that I don’t really love. This even includes socks and underwear, though I find myself struggling in the garage with tools. Working on it… 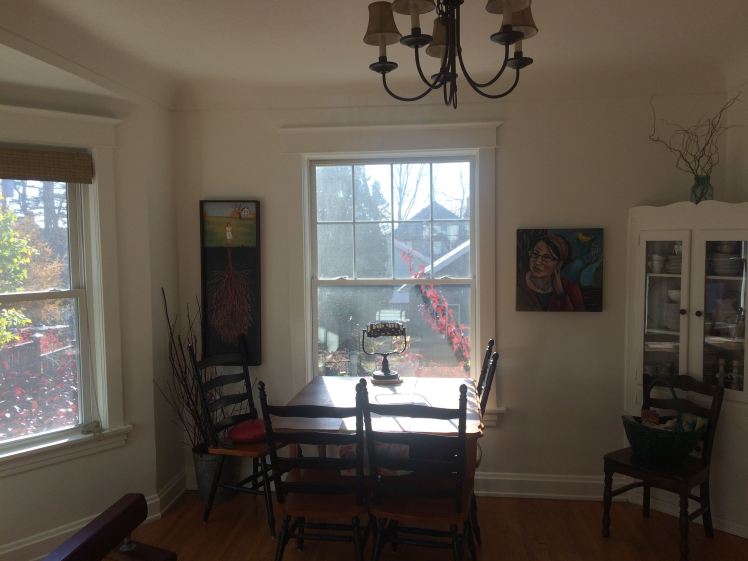 Anyhow, the reporter came to the house with a photographer, and the place looked wonderful. It still does, in fact. I delight in having people inside to visit. How freeing this is!

Take a look at the marvelous column just written about my wife: Daydreaming on canvas: Duluth artist takes whimsical ideas and transforms them into imaginative, fun paintings. The spread was even more impressive in print, as it took up an entire page and a half! 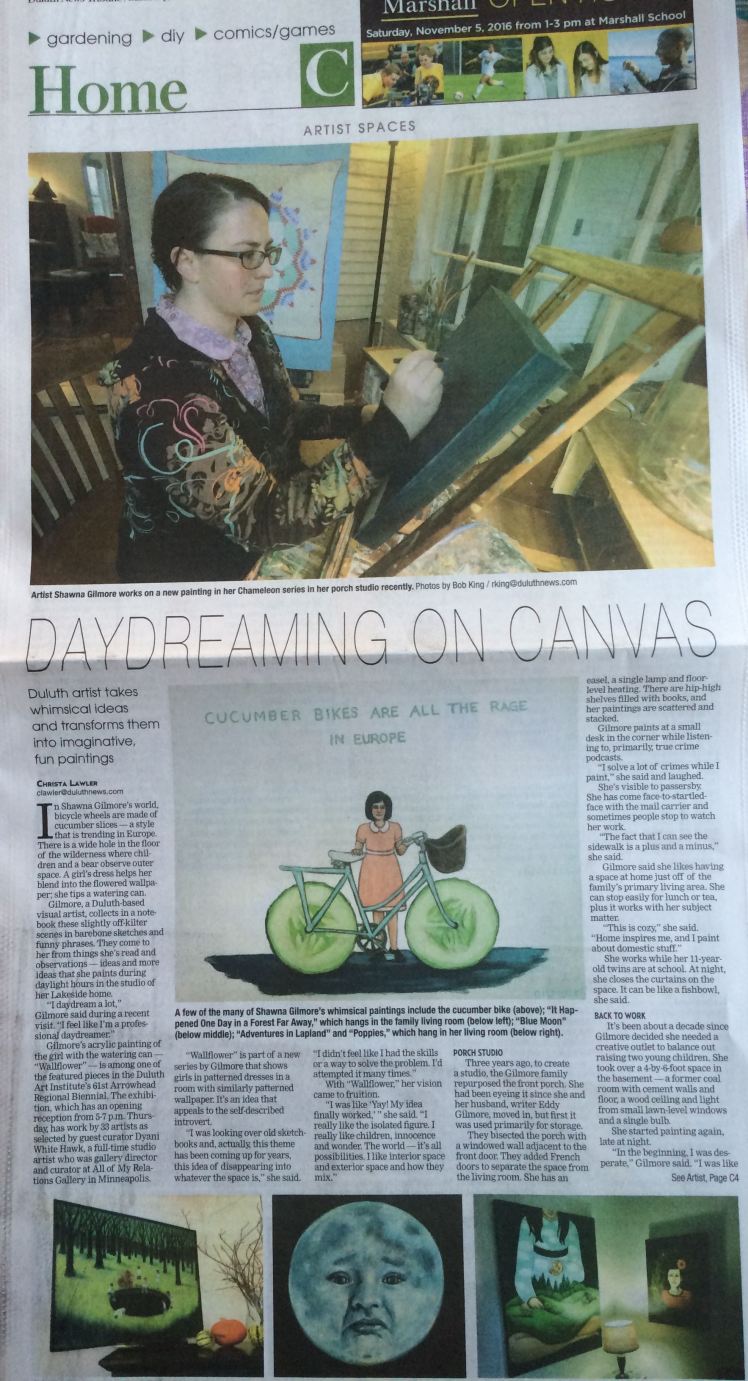 Shawna’s career is finally starting to gain traction, after painstaking work on her part, and I couldn’t be more excited about it. We’ve learned not to pin any financial hopes into such opportunities, but it was just wonderful how this whole experience just fit perfectly into where we were, and where we’re wanting to go with our lives. Next month Shawna takes on a major show in the Twin Cities, at a new Glam Doll Donuts location that opens mid-month, a task for which she is now preparing feverishly. The original location was honored as being among the top 10 donut shops by USA Today, so we’re really stoked to have this be our first foray into the Twin Cities art market.

One of Shawna’s pieces was also selected as part of the 61st Arrowhead Regional Biennial, the longest running biennial in the midwest, which has been a sort of white whale of her’s for about 10% of these. It feels so good to be chosen! The piece that made it in, Watering the Wallpaper, is a real dandy, and seems even more alive in person.  You can see it at the Duluth Art Institute (in the Depot), from November 10 – February 9, 2017.

Next time I will share the Hall of Rejects with you. I can hardly wait! I have struggled with hoarding many of her old pieces, and have finally found the solution. Stay tuned.