My column would have run for the local newspaper last weekend, but that paper now no longer exists. A little piece of me goes with it. Not only did I spend 25% of my lifetime writing for it, the terrifying process of coming up with something original each month made me into the writer that I am today. Perhaps not great, but a writer nonetheless.

I wrote the following words for the Duluth Budgeteer News last fall, and really enjoyed the entire process. Since I don’t fart ideas on a regular basis, I was forced to get my family out for an adventure so I could write about it. Some of our family’s best memories have come as a result of needing something to write about, a practice I hope to continue. I touched on this a bit in an earlier post called Whittling down to the essentials, but this is different. Thanks for your interest over the years. We’ll keep on keeping on, wherever the road may take us. Here’s the unedited version… 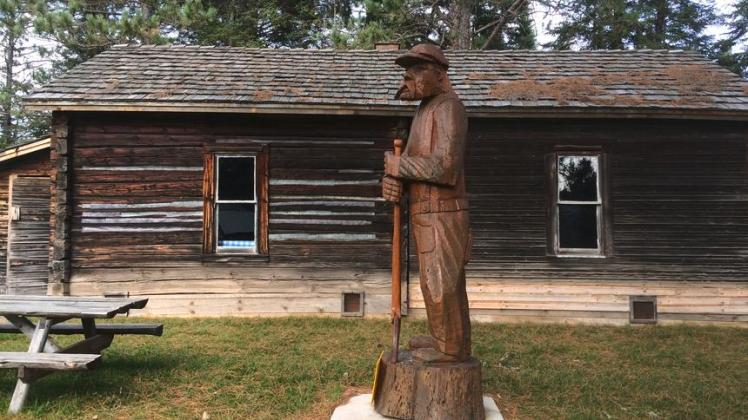 Nearly impossible to comprehend, Eli Wirtanen passed away just 19 years before I was born. My how times change.

Eli was born in Finland in 1870. He emigrated to the New World as a teenager in the late 1880s. Eventually, at the age of 34, he finally had saved enough money to purchase his own 40-acre tract of land.

Not only was this land entirely wooded, there were no roads in the vicinity. Trails, such as the nearby Vermillion Trail, provided access to the outside world by foot or horseback.

Eli cut the trees and uprooted thousands of stumps with the aid of his horse while establishing his farm. Nothing came easy. There were no handouts. He even dug his well by hand. His farm survives today, lovingly preserved by a small group of volunteers, just 40 miles north of Duluth.

The family and I enjoyed a marvelous Sunday afternoon at the old farmstead, shortly after most of the leaves had fallen, and had the place to ourselves. What an experience for our kids. Eli was a contemporary of Laura Ingalls Wilder, so it was easy for them to connect with him and the time period.

Our kids happily ran across the property between the dozen structures, which are spaced far apart in an effort to lessen the potential of a fire destroying everything. All but one of these buildings is kept unlocked. The children sprinted to each, let themselves in, and explored carefully. Their faces beamed with awe and wonder as they emerged from the structures built from materials taken from the forest, calling across the land, “Come see what I’ve found!”

We even enjoyed throwing the pigskin around as we played together on the expansive property under towering Norway pines, which seem to serve as sentinels.

This is a place where one may freely explore and play, allow the imagination to come alive, and soak in the quiet beauty of the place. Innovations of old are around every corner, such as the humble wooden gutter that graces the original sauna.

The opportunity to bask in warm history like this, unshackled to books, a bunch of rules, or locked doors and barred windows, is truly rare.

The simple lives and work ethic of these pioneers draw me like a fly to honey. Having crested the lofty age of 40, I have redoubled my efforts to simplify life in an effort to focus on what really matters.

I continue to dispose of old, burdensome collections, which Eli Wirtanen, who lived in a sparse cabin of two rooms, would have found baffling. Just this week I finally dispensed with an albatross that I’ve been carrying around for three decades: approximately 20,000 baseball cards. I began collecting these cardboard rectangles just 28 years after Eli died. I was convinced they’d make me rich someday.

At the same time, I hoarded over 100 live animals in my bedroom, about half of which were birds that flew freely about. The cards were no less toxic than the bird droppings that made their way between my bedsheets.

Thousands of hours and dollars went into them. Ultimately I received eight carefully folded $20 bills in exchange for them.

Both of these collections were detrimental to me for many reasons. A steady flow of cash earned from delivering newspapers, coupled with zero sense of responsibility or guidance, enabled this obsessive collecting.

My income, drawn from 10 hours of mostly pleasant work each week, dwarfed what Eli earned each winter at various lumber camps. Excessive money in the hands of a child, even adults, is not a good thing. A little guidance, an ethic bent toward saving rather than spending, and a spirit of generosity toward others, is absolutely necessary.

It is humbling to reflect upon how hard Eli worked in order to grub out a basic existence. He travelled across the world, saved tiny amounts of cash, and endured countless hardships prior to being able to afford the land he’d ultimately work for 50 years. He never had electricity or owned a car, but he was self-sufficient and truly free.

We can all learn volumes from an uneducated Finn by the name of Eli Wirtanen.

2 thoughts on “Gleanings from the book of Eli”